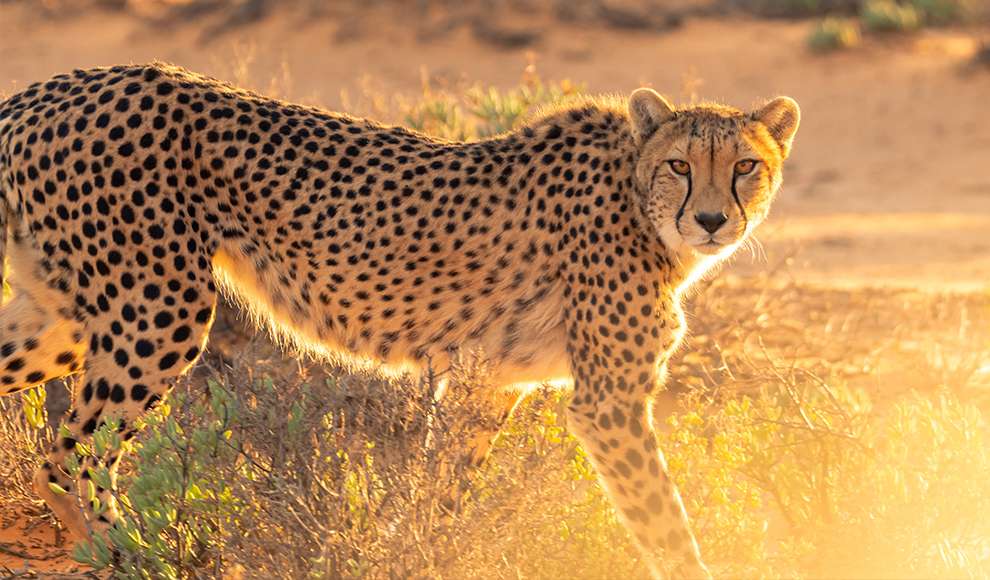 Cheetahs are part of the Feline (Felidae) family, distinguished by their tan coloured fur with black spots. They are very lean cats, with long legs and a tail allowing them to achieve speeds of 80-130 km/h. Their deep chest contains large lungs. There are five sub-species of Cheetah.

Historically, Cheetahs existed within most of the African and Asian continents, although today they only remain in 10% of their historic range. Their range is now extremely fragmented with vast majority (76%) located on unprotected lands. In Asia their distribution is limited to the central deserts of Iran, with populations estimated at 60-100 individuals.

Southern and Eastern Africa remain the species strongholds, although there has been significant loss across regions. In Eastern Africa, it is estimated that approximately 2,572 adults reside in only 6% of their historic range, equating to an area of 310,586km². These populations are distributed into 15 subpopulations, only four of which containing densities above 200. A large proportion of these Cheetahs exist outside of protected areas.

In Southern Africa, it is estimated that approximately 4,190 adults reside in 22% of their historic range, an area the size of 1,223,388km². This populations exist within 10 subpopulations, the largest being 3,940 individuals. The other nine populations are much smaller in size with only three individuals being recorded in Matusadona, Zimbabwe. A large proportion of these Cheetahs exist outside of protected areas.

In Western, Central and Northern Africa species densities have declined, with only 446 adults recorded in these regions. The subspecies found in Northwest Africa is now listed as Critically Endangered. Cheetahs have been extirpated from historic ranges in many countries including Nigeria, Guinea, Senegal, Cameroon and more.

Cheetahs in Africa are found in a wide range of habitats, including dry forests, thick scrub, grasslands and hyperarid deserts. They are not found in tropical and montane forests, although some reports suggest Cheetahs inhabit Mount Kenya at altitudes of 4,000 m. In Iran their habitat consists of desert with less than 100mm annual rainfall.

Cheetahs are the fastest land mammals, which is a large advantage to catch prey. Their prey consists of small to medium sized ungulates, specifically Gazelle, Impala and Kob. Although they have been documented to feed on birds, small mammals, and large ungulates such as Wildebeest. They are rarely scavengers unlike other African predators. They also differ by being most active during the day, which may have been adapted to reduce competition. Although this is only in areas where competition between other predators is high. In regions with less competition, they demonstrate nocturnal activity.

Female Cheetahs are solitary, excluding those with dependent young. These females will follow migratory patterns when their prey is migratory. Male Cheetahs are either solitary or live in coalitions of two or three. These coalitions usually consist of brothers who establish territories centred around attracting mates. Lions, Spotted Hyaena, Leopards, Honey Badgers and Jackals are all predators to Cheetah cubs.

Cheetahs are keystone species, meaning they play a critical role in shaping their habitats and altering ecosystems. They are apex predators, therefore play a crucial role in regulating populations of their prey, especially herbivores such as Zebra and Wildebeest. Without Cheetahs herbivores would overconsume grasslands and forests, leading to less food available for other species and an unbalanced ecosystem. Similarly, Cheetahs help to maintain healthy populations of herbivores by usually preying on the sickest, weakest and oldest animals.

Habitat loss poses a significant threat to current and future populations of Cheetah. Human population growth and land conversion has resulted in Cheetah suffering reductions to their ranges, becoming more isolated and fragmented. This is concerning when considering the wide-ranging nature of Cheetahs with densities rarely exceeding two individuals per 100km². Fortunately, Cheetahs have shown resilience to anthropogenically modified habitats, being found in both protected and unprotected areas.

Outside of protected areas, Cheetahs are often met with conflict from livestock and game farmers. Cheetahs have been reported killing commercially valuable livestock and are usually killed by farmers in retaliation. As they are rarely scavengers, they are harder to poison than other carnivores which pose threats, such as Lions. With projected human population growth, land conversion is expected to accelerate in future decades. This will reduce protected habitat areas for Cheetahs and other species, resulting in increased human-animal conflicts.

Cheetahs face threats from prey depletion. The wild herbivores which comprise the majority of Cheetahs diets are under threat from the unsustainable bush meat trade, leading to lower populations. This limits the food resources for Cheetahs and other predators, limiting population growth. This has knock-on effects of Cheetahs preying more frequently on livestock, increasing conflict with humans.

Trophy hunting industries still operate in some African countries including Botswana, Mozambique, Namibia, Tanzania, South Africa and Zimbabwe. There is an ongoing debate as to whether trophy hunting benefits conservation as the revenue created has potential to fund wildlife conservation efforts if used correctly, whilst the act of hunting could also help maintains the biodiversity of ecosystems. The only current African Cheetah hunting is located in Namibia, where there are very specific rules and guidelines which are followed.

Cheetahs are vulnerable to poaching for their skins, bones and other body parts considered to be of medical value in Eastern cultures. There is also a substantial illegal trade in Cheetah cubs to Gulf states.

As a species Cheetah experienced a population bottleneck about 10 000 years ago and therefore have low genetic variation. Saving The Survivors (STS) assisted several reserves with the translocation of Cheetah to improve the genetic management in these game reserves, which is critical to limit inbreeding, and ensure a healthy population. STS have also assisted with the collaring of two Cheetahs as part of a meta-population project.