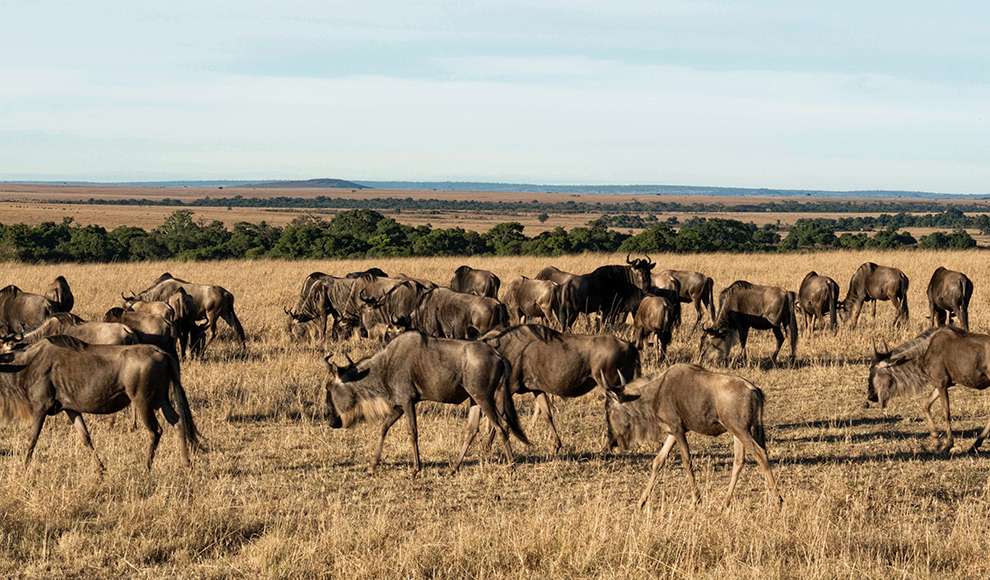 They are a part of the Antelope species, with both males and females growing curved horns on their head. They typically have grey to black manes and beards which can be either black or white.

Historically Common Wildebeest roamed southern Kenya southwards to Namibia, Mozambique, Botswana and South Africa. Following aerial surveys in the late 1990s, the total population of Wildebeest was estimated to be over 1,2000,000. The migratory Serengeti-Mara population at this time equated to 70% of the global population, although this population was greatly affected by the 1993 drought.

The most recent estimates conducted in 2009, suggests a total population of 1,550,000 Common Wildebeest. This is largely due to the rebounding of the Serengeti population to 1,300,000 individuals. The species was also introduced to the Eastern highlands of Zimbabwe and to private farms in Namibia, which was formally outside of their historic range. Populations of the Eastern White-bearded Wildebeest suggest a steep decline since the 1990s, with an estimate of only 6,000-8,000 individuals.

Common Wildebeest can be found in short-grass plains, in woodland areas and bordering savannas open bushland. This species is sensitive to drought, requiring water at least every day. During the rainy season, Wildebeest reside on shorter grasslands, migrating to longer grasslands with higher rainfall and permanent water sources during the dry season. The Great Migration sees over 1.5 million Wildebeest, along with other animals, migrate on a loop through Tanzania and Kenya following the rainy season.

Wildebeest are keystone species, meaning they play a critical role in shaping their habitats and altering ecosystems. They play an important role in keeping grasslands short by grazing on grasses, essentially being the “lawnmowers” of their ecosystems. This helps to reduce risk and frequency of fires. They also contribute to larger predators’ diets, including Lions.

Human population expansion and land conversion to agricultural land, mining and human infrastructure has resulted in reduced population of Wildebeest. Similarly, the introduction of fences has blocked migration corridors between wet and dry season ranges, leading to high rates of mortality as access to water is blocked during droughts. With projected human population growth, land conversion and urbanisation is expected to accelerate in future decades, further reducing habitat areas for Wildebeest.

The range of Wildebeest may be further reduced in the future due to climate change increasing the frequency and severity of droughts. This species is dependent on water, migrating seasonally to follow the rainy season. The limited freshwater supplies during drought seasons, threatens to further reduce population numbers.

Although the Common Wildebeest is not a species we commonly work with as part of our emergency care, we will rescue and rehabilitate any animal we are called upon to help.

We have previously assisted with the relocation of 72 Wildebeest from South Africa to Zinave National Park in Mozambique. This was part of the reintroduction of multiple species to the area, aiming to rehabilitate a beautiful and ecologically diverse National Park.

Similarly, our emergency care work with apex predators including Lions also assists prey species including the Common Wildebeest. By rescuing and rehabilitating apex predators, this ensures the conservation of these species. This in turn ensures healthy populations of prey species due to predators hunting the oldest, weakest and sickest members of groups. Similarly, this prevents herbivores such as the Common Wildebeest from over consuming food sources, helping to maintain a balanced ecosystem.