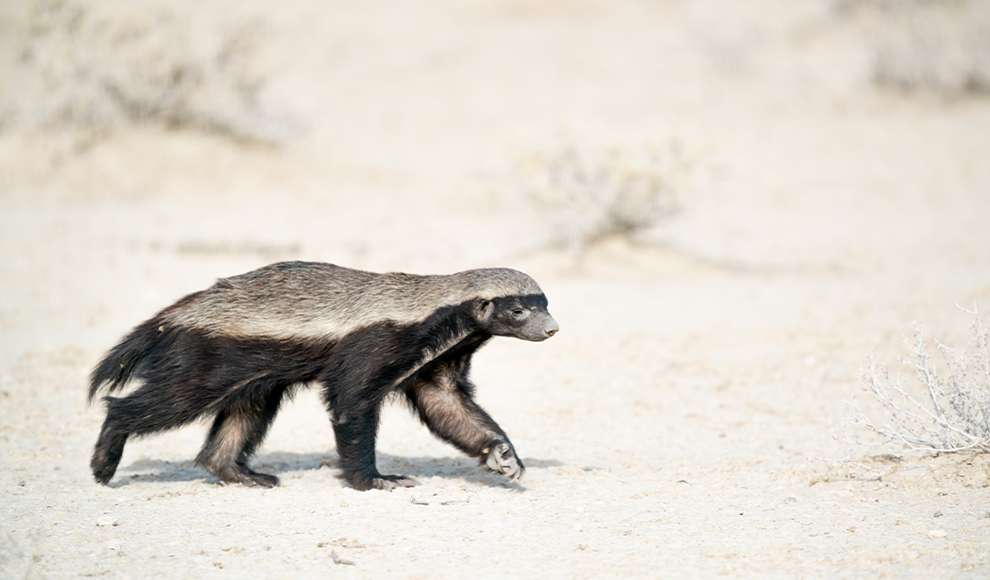 Honey Badgers are long-bodied animals with short legs and long, coarse fur with no undercoat. Their skin is very loose and thick, allowing them to easily turn and fight predators. The males tend to be at least one third larger than females, and despite their size and appearance they are extremely aggressive animals. The name Honey Badger is derived from their fondness for consuming honey and Honeybee larvae.

Historically Honey Badgers had an extensive range, extending through most of sub-Saharan Africa in countries such as South Africa to Morocco, and extending further than Africa in Arabia, Iran, Nepal, India and Uzbekistan and Turkmenistan. The species still retains much of its historic range, mostly occurring in low population densities. Based on the conduction of night counts, it is estimated that there are 0.1 individuals per km² in the Serengeti National Park in Tanzania. The only regions Honey Badgers tend to avoid are the driest areas of the Sahara Desert, the Mediterranean coast, central Africa and the Nile valley.

Honey Badgers occupy a wide variety of habitats, with a high altitudinal tolerance from sea level to 4,000 m in the Bale mountains, Ethiopia. They have no obvious ecological specialisation. Habitats include the dense rain forests of equatorial Africa, arid deserts on the outskirts of the Sahara, sand and clay deserts in Middle Asia.

Honey Badgers are nocturnal animals, although they may be more active during the day in regions with little human disturbance during dry seasons when temperatures are cooler. These animals are primarily solitary with large home ranges of up to 500km² for males, explaining why the population density remains low.

Honey Badgers are opportunistic carnivores preying on any animal smaller than themselves, including insect larvae and the young of medium-sized carnivores. Predators of Honey Badgers include Lions, Leopards and Black-backed Jackals.

Due to Honey Badgers being opportunistic carnivores, their diets are diverse, meaning they play a crucial role in maintaining populations of numerous animals and insects in the ecosystems they live in. Similarly, these animals are prey for larger predators including Lions and Leopards, regulating other species populations.

Honey Badgers are also notorious for their bravery and tenacity, a quality which has also made them popular for the traditional medicine trade.

Honey Badgers are unintentionally killed by non-selective control programs which target other species such as Caracal and Jackals. In some areas, such poisoning has resulted in local extinctions of Honey Badger.

Although Saving The Survivors (STS) is best known for the emergency work performed on Rhinos, due to the countless poaching incidents, we will also assist any animal in need we are called upon to help.