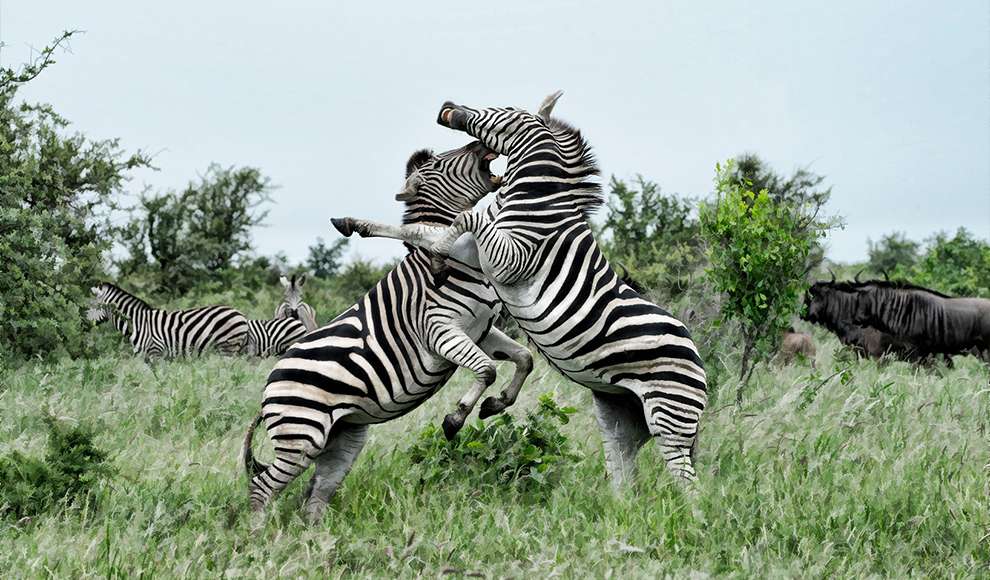 Zebras are African equines, distinguished by their iconic black and white stripes. There are three species of Zebra including the Plains Zebra (also referred to as the common Zebra), Grevy’s Zebra and the Mountain Zebra. Grevy’s Zebras have the lowest population at just 1,956 mature individuals, reported by the IUCN in their 2016 review.

Plains Zebras are common and widespread across Africa, although 10 out of the 17 countries they are found in have experienced population declines since 1992. The range of current populations is from South Sudan and Southern Ethiopia, East of the River Nile, to Northern South Africa and Northern Namibia. Zebras are now extinct in Burundi and Lesotho.

Plains Zebras mostly occupy savannas, shrublands and grasslands, although they have been found in all African habitats except for rainforests, sand dunes, deserts and Cape Sclerophyllous vegetation. Plains Zebras also occupy a wide variety of altitudes from sea level to 4,300 m on Mount Kenya.

Plains Zebras live in family groups which congregate and move as part of a herd for various periods of time throughout the year. The range of Zebras is determined by seasonal vegetation changes and habitat quality, varying across the continent. Zebras are migratory animals, moving in search of resource abundant areas across the seasons.

Zebras play a crucial role in their ecosystems by maintaining vegetation. This is achieved by consuming older vegetation as they migrate, allowing for new vegetation to form, increasing the quality for other herbivores. This also has knock-on effects of controlling insect populations in Africa, as they consume the same material as insects. Thereby, reducing problems associated with high insect populations.

Zebras play an integral role in the food chain for many African carnivores, namely Lions, helping to regulate other species populations.

Quagga is a sub-species of Plains Zebras which was declared extinct in the late 19th century due to overhunting and competition with livestock. The poaching of Zebra still occurs today to be sold for their distinctive coat and for meat. This has led to decreases in populations which has persisted since 1992.

The range of Zebras may be further reduced in the future due to climate change increasing the frequency and severity of droughts. This limits freshwater supplies needed for survival, forcing Zebras to venture further into inhabited areas in search for water, increasing the human-wildlife conflict. The increased risk of bushfires associated with droughts also threatens further loss of habitat and potentially leads to humans relocating to protected or semi-protected areas.

Although Saving The Survivors (STS) is best known for the emergency work performed on Rhinos, due to the countless poaching incidents, we also assist any animal in need we are called upon to help.

STS have assisted with a Zebra who experienced a nasty snare wound inflicted by poachers. The stallion was seen severely limping, with a deep cut in his hindlimb tissue. Our team tended to the wound, washed and treated it with antibiotics and L-Mesitan Wound Care medical grade Honey. The very next day the Zebra could be seen walking again, taking full weight on his leg.

Similarly, our emergency care work with apex predators including Lions also assists prey species including the Plains Zebra. By rescuing and rehabilitating apex predators, this ensures the conservation of these species. This in turn ensures healthy populations of prey species due to predators hunting the oldest, weakest and sickest members of groups. Similarly, this prevents herbivores such as the Plains Zebra from over consuming food sources, helping to maintain a balanced ecosystem.