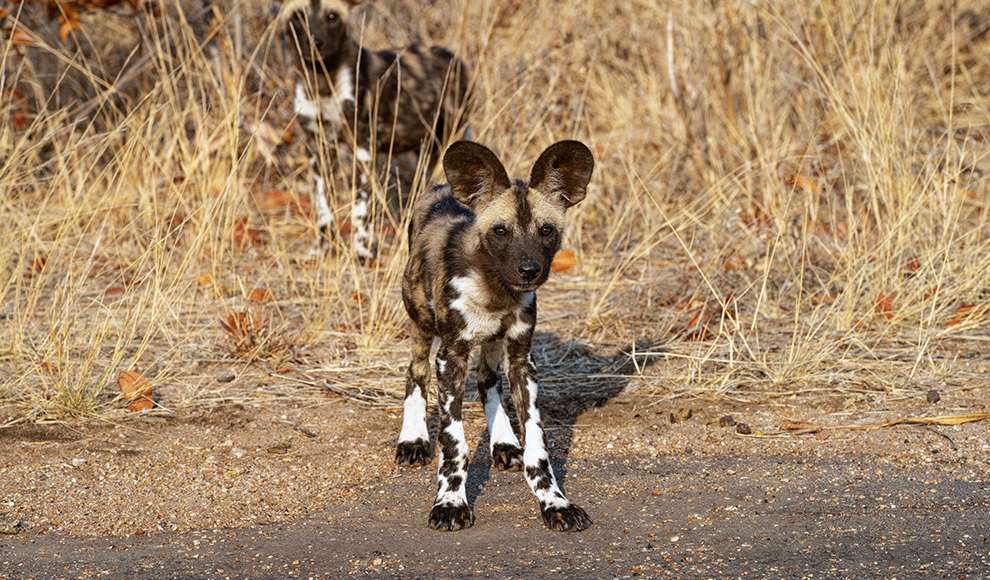 African Wild Dogs are much leaner and taller than most domesticated canines, with large ears and no dewclaws. Their colourful patchy coats are mottled in shades of beige, black and brown. They are of one the world’s most endangered animals.

Historically, African Wild Dogs were distributed throughout much of sub-Saharan Africa, from deserts to mountain summits, only absent from the driest deserts and tropical forests. Today, the species is mostly eradicated from North and West Africa, with the largest populations remaining in Southern Africa.

The species is rarely ever seen, with packs always existing in low densities. The exact mature population is difficult to gage as packs usually comprise of an alpha male and his mate as the parents of the pups. Therefore, a high proportion of these individuals are reproductively supressed. Even in mature packs in the event of an alpha dying, there is no opportunities of breeding as no unrelated mates exist within the pack.

African Wild Dogs occupy a wide range of habitats including upland forests, bushy savannas, semi-desert and short-grass plains. Their occurrence has been documented in most habitats except for lowland tropical forests. The current distribution may not reflect their ideal habitat, rather it reflects the limited area available from human encroachment.

African Wild Dogs are keystone species, meaning they play a critical role in shaping their habitats and altering ecosystems. They are apex predators, regulating populations of their prey, especially ungulates such as Wildebeest. Without Wild Dogs, many herbivores would overconsume grasslands and forests, leading to less food available for other species. Similarly, Wild dogs help to maintain healthy populations of herbivores by usually preying on the sickest, weakest and oldest animals.

The main threat facing African Wild Dogs is the encroachment of humans onto their habitats, leading to habitat fragmentation. This also increases the human-wildlife conflict as African Wild dogs and Humans are coming into more regular contact with each other. This is particularly concerning with livestock and game farmers where a high proportion of African Wild Dogs are killed in order to defend property. With projected human population growth, land conversion is expected to accelerate in future decades, increasing the human-animal conflict

Similarly, the increased contact with Humans results in more African Wild Dogs being killed in road accidents, snares and by foreign infectious diseases. In some parts of South Africa, “predator proof” fencing has posed an effective way of keeping dogs confined to reserves, although there is no guarantee these will work every time.

The population of African Wild Dogs is much lower than the prey base could support. This is due to competition with hyaenas and predation from Lions. Even in the larger reserves such as Selous Game Reserve, with an area of 43,000 km² (approximately the same size as Switzerland), there is only an estimated 800 individuals. At these sizes, if there were to be catastrophic events such as an outbreak of epidemic disease, the species would likely collapse.

Saving The Survivors (STS) was the driving force behind the introduction of Wild Dogs to Karingani private nature reserve in Mozambique. The Karingani Pack was introduced in 2019 and has thrived in this reserve situated in the southwest of Mozambique, bordering South Africa’s Kruger National Park. The strong conservation focus and monitoring at Karingani have seen the Wild Dog population double in the past two years.

STS have also treated several Wild Dogs for snare injuries, which if not removed, would have resulted in amputation of the leg with dire consequences.  We were also involved in several disease vaccination programmes in Wild Dogs as well as collaring operations and screening of Wild Dogs for tuberculosis, before they were released into a National park.