Karingani game reserve requested our assistance to help capture a male lion. This Lion escaped into community land and seemed to have a snare wound around the right front leg.
Thanks to Karingani´s rangers and managers the animal was located. We then darted, and translocated the animal all the way back to the reserve. Samples and measurements were collected for the Greater Limpopo Carnivore project research team. Then the snare wound was cleaned and treated.

African lion populations have suffered a dramatic 43% decline over the past 20 years. Less than 20,000 currently exist in the continent. Lions are extinct in 26 African countries. Above all, they have vanished from over 90% of their historic range. Though lions still exist in 27 African countries, only seven countries are known to each contain more than 1,000 lions.

An Insight Into Lions

Lions are currently listed as “Vulnerable” on the International Union for the Conservation of Nature (IUCN) Red List of Threatened Species. In West Africa, the species is now classified as “Critically Endangered.

The species is threatened by the illegal bushmeat trade, habitat loss and fragmentation. Disease and conflict with local people due to the real or perceived threat lions pose to livestock.

Karingani Game reserve is located in southern Mozambique. Additionally, it protects 150 000 hectares of pristine wilderness next to Kruger National Park. The reserve is part of the GLTCA (Greater Limpopo transfrontier conservation area). This is one of the largest protected conservation areas in the world. Furthermore, it is critical for the survival of Black and white rhinoceros, elephants, lions, cheetah, wild dog and many others. 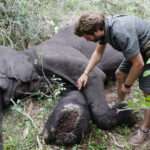