On the 24th of September 2016, the day that president Jacob Zuma opened CITES CoP17 in Johannesburg and called rhinos “our proud heritage”, Saving The Survivors treated this severely injured twelve year old White rhino bull in the North West province after a vicious attack by poachers. A very despondent owner, who initially wanted to put him down because of the severity of the injuries, accepted STS’s offer of assistance in rescuing and treating the animal.

Seha (short for Sehawukele meaning ‘have mercy on us’ in Zulu) was the only survivor after five rhinos where poached on the same property. Both his horns were hacked off leaving a gaping wound of 49 cm x 26 cm and extending into the nasal cavities. Not since Hope was left for dead and found with both her horns removed 16 months ago in an attack in the Eastern Cape, had STS encountered such callousness.

But just like this extraordinary and courageous lady that has since become the icon of all rhino poaching survivors, Seha has shown tremendous resolution, almost audacity by not taking this attempt on his life lying down.
Despite the severity of his wounds and the pain he must endure when they are attended to, there’s nothing wrong with the appetite of this big guy. He is gobbling up everything that is put down in front of him, with a fondness for the green lucerne. This is a good sign because as long he is eating well, it means the healing process is progressing.

Seha continues to surprise us every day, and he has just been relocated to a bigger camp. He has been introduced to two rhino cows and they are getting along very well – so much so t 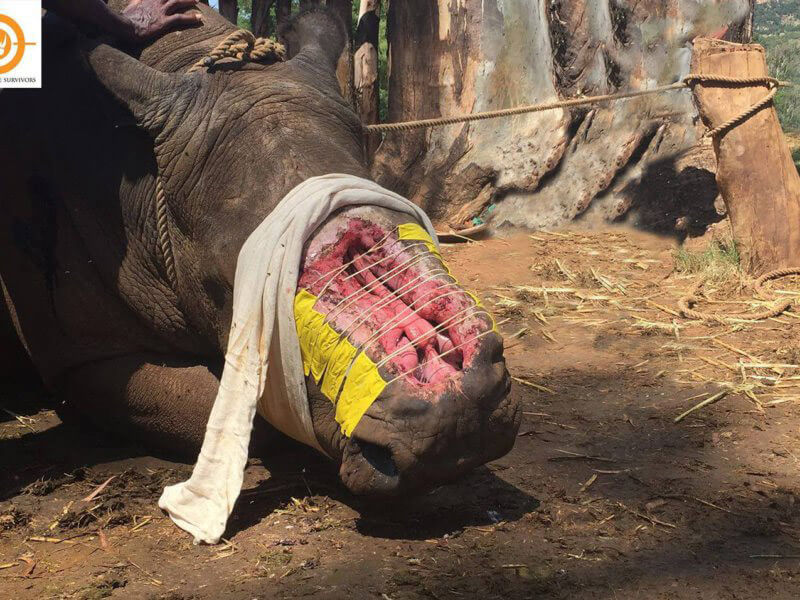