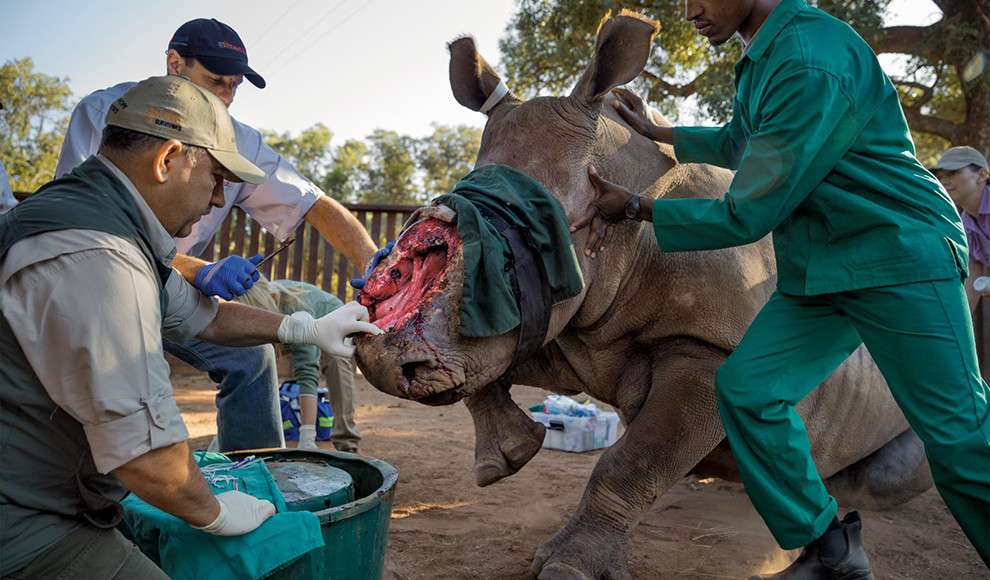 There will always be Hope, for this iconic Rhino will live on in everyone’s hearts and in Saving The Survivors mission of Creating Hope from Hurt.

The Eastern Cape has suffered major losses to poaching in the last 20 days. On the 30th April 2015, two white Rhino, an adult cow and her young calf, were poached at Lombardini Game Farm. Both defenceless animals were shot and killed with a large calibre rifle and the horns of the cow were removed. The senseless killing of the two-month-old calf was especially disturbing as the poachers left the calf’s horn intact, but shot him anyway.

Only a week later Lombardini suffered another loss when a sub adult white Rhino bull was shot, killed and the horns removed, and another four-year-old Rhino cow was missing… She was found in dire condition a couple of days later. Her face was badly mutilated; both horns were savagely hacked off. Although she was still alive, there was serious damage to her face. In the process of removing her horns, the nasal bone was badly fractured, and a section completely removed, exposing the sinus cavities and nasal passage. Added to this there was a severe infestation of maggots. It is assumed that she was immobilised (darted) with an opioid drug and left to die. However, against all odds she survived.

Saving the Survivors travelled to Shamwari to assess her condition, upon which it was established that she could indeed be saved and the vets undertook major surgery.

The damage to her face was severe. The wounds had to be cleaned, lots of dead and damaged tissue removed and an artificial cast fitted to cover the extensive wounds. This cast is to prevent damage while looking for food as well as to prevent bacterial infection and maggot infestation. After surgery she was released from the boma (pens) into a small camp where she can be closely observed, and feed on natural vegetation

Today’s procedure and her journey ahead demands a huge team effort and our thanks go out to every member of the public who has been moved to share Hope’s story. Without your voices her struggle would be a silent one. Our thanks must go to The Wilderness Foundation, Medivet UK, Dr Johan Joubert and his team on Shamwari Game Reserve, including his incredible ground crew, led by Bruce Main, who have provided exceptional support through all our procedures with Hope, and for dnata4good for their ongoing support of STS

“We have successfully treated a Rhino in the Free state that was in a similar condition. So, from experience, we believe that she has a fighting chance. With the experience of the Saving the Survivors team in the treatment of poached rhino, we believe that she has a real shot at recovery. The welfare of this Rhino is paramount, and we will do our utmost to ensure her comfort and survival.”

After surgery she was released from the boma into a small camp where she was closely observed and fed on natural vegetation.

The biggest challenge was keeping Hope’s shield in place when most of the bone required for attachment points has been removed by the poachers. Dr Marais said, “we took radiographs of the damaged area to ascertain if there were anchor points and enough bone integrity to attach the shield. The bone has to be healthy enough to be able to drill the shield into place, it’s the only way that we are able to make sure it stays on. In the absence of sufficient bone, we sutured the bottom part of the shield on which should keep it in place for longer. Her procedure took longer than we would have liked so we have now made a mould of the shield so next time it is ready to be attached which should cut down procedure time by 45 minutes from over 2 hours.”

This courageous rhino has been the face of rhino poaching survivors. Wandering alone in the bush for days, deeply hurt and with half her face hacked off, she survived against all odds. It was no wonder then, that she was christened Hope and became a worldwide ambassador for her species. While her healing was described as miraculous, she unfortunately passed away due to an intestinal infection in late 2016.

It is with heavy hearts and great sadness that Saving The Survivors has to share the devastating news that our beloved White Rhino, Hope, is no longer with us. She was found yesterday late afternoon without life in her boma where she has been cared for since March this year.

This courageous rhino has been the face of rhino poaching survivors since she survived a brutal attack last year. Caught in the war zone, wandering alone in the bush for days, deeply hurt and with half her face hacked off, she survived against all odds. It was no wonder then, that she was christened Hope and became a worldwide ambassador for her species.  Her healing was described as miraculous and she continued to show a fighting spirit, bar none.

The cause of death appears to be a bacterial infection of her small intestine, and we have requested further tests to shed light on this immense tragedy.  Dr Johan Marais was himself present at the postmortem, and the entire small intestine was severely affected, showing signs of haemorrhage and discolouration.  Looking at the injury, the course of the disease was extremely quick, that she must have died within an hour or two maximum.  This is also confirmed by the fact that she was seen on Sunday afternoon with no signs of being sick, and then was found dead late afternoon.

Hope has won over hearts of people all over the world.  She was a feisty and fabulous Rhino that never gave up her fighting spirit.  She contributed immensely to science, by teaching veterinarians how to heal her face, so that other Rhinos may benefit from this new info.

Hope was featured in hundreds of print publications as well as on all the major news channels and networks worldwide.  By doing so she created massive awareness on the rhino poaching crisis, across the globe.  This is something that cannot be bought or measured in monetary terms.

“I am incredibly privileged to have been able to work on such an amazing animal” – Dr Johan Marais.

There will always be Hope, for this iconic rhino will live on in everyone’s hearts and in STS’s mission of Creating Hope from Hurt.