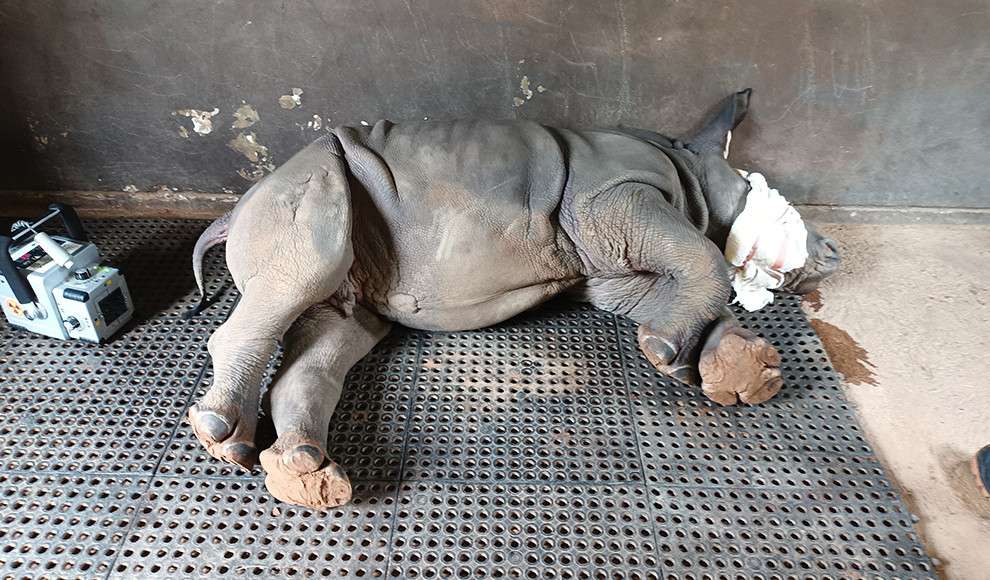 Impi was initially rescued by her own mother, Manala, when she was only 5 weeks old. Manala protected little Impi from an attack by 12 lions at a private game reserve somewhere in South Africa! Manala eventually managed to chase the Lions away, but not before poor Impi’s right leg, in particular her stifle joint, was bitten and badly injured. Impi and her mother Manala were both rescued to taken to the sanctuary of The Rhino Orphanage in July 2021.

A team effort has resulted in Impi’s survival. The amazing caretakers at The Rhino Orphanage, as well as local wildlife veterinarian, Dr. Pierre Bester, managed to stabilise the young calf and ensure that she and her mother well fed and taken care of in the safety of the sanctuary.

Impi was unfortunately injured during the lion attack. At first it was thought that Impi had injured a joint in her right hind limb but it was taking exceedingly long to heal. Dr. Pierre monitored the limping and saw that Impi was not bearing her full weight on the leg.

In January 2022, it was decided to call in Dr. Johan Marais and the team from Saving the Survivors to assess the limb using mobile radiography. Upon close inspection of the x-rays, it was found that the lateral condyle of the femur had suffered serious damage, with loss of the ligaments as well. This information was discussed among a group of vets to decide the best treatment going forward to give this little Rhino a normal life going forward.

With the help of an incredible team of specialists from Animotion, a specialised, custom-made brace was designed and made for Impi! In April 2022, Impi’s Rhino-sized knee brace arrived and was fitted to stabilise her stifle joint and prevent the joint from turning outwards. Although corrective surgery cannot yet be performed as she is still growing, having stabilised Impi and her fractured stifle, she is now able to continue more comfortably to grow and heal, under the watchful eyes of her Rhino and human moms!