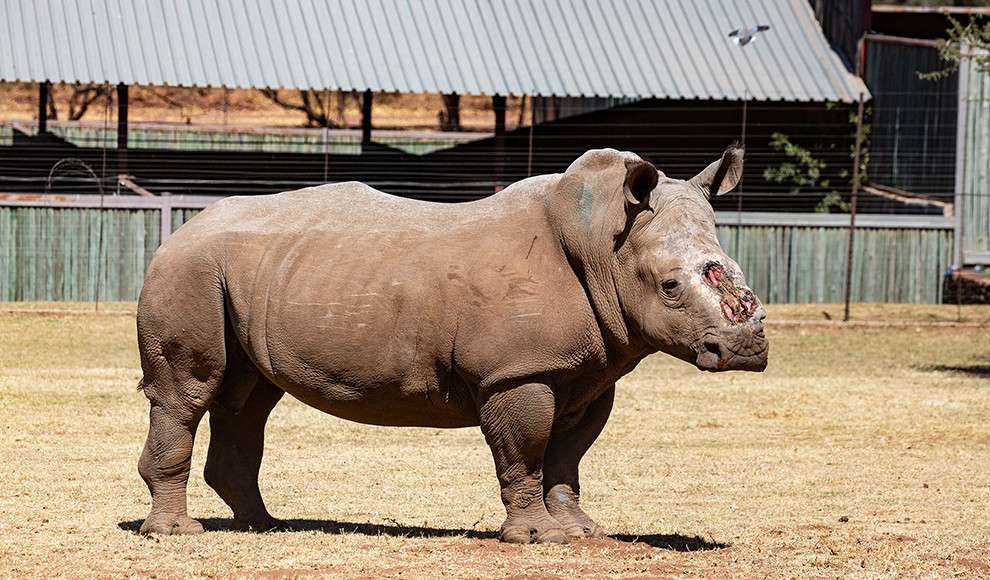 On the 24th of September 2016, the day CITES CoP17 opened in Johannesburg and the South African President called rhinos “our proud heritage”, Saving the Survivors treated this severely injured twelve-year-old White Rhino bull in the North West province after a vicious attack by poachers.

A very despondent owner, who initially wanted to put him down because of the severity of the injuries, accepted STS’s offer of assistance in rescuing and treating him. Seha (short for Sehawukele meaning ‘have mercy on us’ in Zulu) was the only survivor after five rhinos were poached on the same property. Both his horns were hacked off leaving a gaping wound of 49 cm x 26 cm and extending into the nasal cavities. Not since Hope was left for dead and found with both her horns removed 16 months earlier in an attack in the Eastern Cape, had STS encountered such callousness.

Seha has endured many treatments over the last few years and has showed remarkable resolve and courage to survive. In 2018 we decided his wound had healed enough to introduce him to two females, with the result that little Daniel was born in June 2019. This underpins the concept of saving injured and poached survivors, allowing them to breed eventually as to not lose their genetics and continuing the survival of the species

As of January 2022, Seha has been successfully returned to the wild! A safe and well protected game reserve in the heart of Limpopo Province of South Africa has been identified and is now the home of this incredibly brave and strong Rhino. Additionally, and with our partners “Baby Rhino Rescue”, it was decided to purchase two female Rhinos of breeding age, with the hopes that Seha will take a fancy to these ladies, thus further contributing his strong genetics to the greater Rhino population.

Since the introduction of the two Rhino cows (called Tshilidzi and Dakalo) over 6 months ago, Seha has yet to find them! With this new information, we now realise that Seha’s sense of smell must have been damaged during his horrific poaching incident.

Unfortunately, it became apparent thanks to the constant watchful eye of Seha’s personal Rhino shepherd that his condition was quickly deteriorating during his first winter in his new wild home. He was not doing well, and his condition was quickly deteriorating. The STS team and our generous supporters worked quickly to gather resources and additional feed was brought to him twice daily for a few weeks which perked him right up! Today, Seha is again the chunky and cheeky bull we have grown to love over the years.

Unbeknownst to us all the two females who were bought to accompany Seha turned out to be pregnant all a long! This was a shock to Seha as much as for us! They are both now single mothers and have been moved to a separate large area in order to ensure the calves and Seha both remain safe during this critical time in the new calves and mothers lives.

Saving the Survivors is planning on introducing a young juvenile Rhino to be Seha’s companion without having to depend on his faulty nose to find one. Hopefully soon, Seha will be back in a crash of Rhinos that he can once again call his family, contributing to the survival of a species.