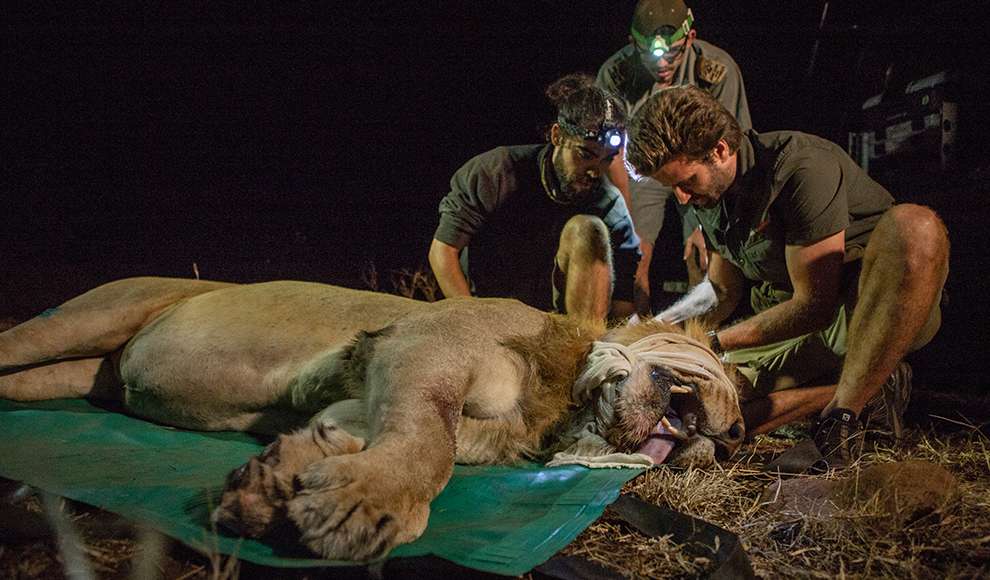 Saving The Survivors (STS) was founded by Dr. Johan Marais in 2012 to treat and care for Rhino that had fallen victim to poaching or traumatic incidents. This included Rhino that have been wounded by other animals, by their own misfortune or by poachers who have hacked off their horns, as well as victims of snaring and other trauma.

Whilst we are best known for our emergency work with Rhino, we also treat any other wildlife in need. The STS team regularly works with Lion, Leopard, African Wild Dog, Elephant, Sable and Roan Antelope, to name but a few. In addition to this, we manage and deliver many proactive initiatives such as breeding programs, and community engagement and education programs.

Saving The Survivors also works hard to mitigate the human wildlife conflict through tracking and translocation of wildlife as well as rural community empowerment projects.

Through proactive work with local communities, Saving The Survivors aims to mitigate the human-wildlife conflict which arises when wildlife interacts with humans, having adverse impacts on both humans and wildlife.

Elephants in particular can cause extreme damage to local communities by raiding crops, destroying water supplies, killing livestock and injuring or in extreme cases killing people. The cost of such conflict is usually high and can result in communities taking matters into their own hands and killing Elephants.

Saving The Survivors aims to mitigate the conflicts which arise from human-Elephant interaction by collaring Elephants to track their movement and intervene before contact can occur. By collaring Elephants this also allows us to track natural migration corridors so both local communities and prospective land managers can avoid these areas, keeping both people and Elephants safe from harm.

Local communities are also provided with an Elephant tool kit, containing items such as flashing lights, Elephant repellent (comprised of garlic and chilli), and bangers and fireworks, to harmlessly defend themselves from Elephants.

Agricultural communities are advised on crops which are less attractive to Elephants to prevent damage to food and economic sources.

Elephants are keystone species, meaning they play a critical role in shaping their habitats and altering ecosystems. However, their population density determines whether they have a positive or negative impact on ecosystems. For example, if the population of Elephants exceeds the habitats carrying capacity, tree cover would be reduced, leading to reduced populations of browser species such as Black Rhinos and Giraffes. Similarly, if there are too few Elephants, there will be too many trees due to less trampling of vegetation and stomping of saplings. This will reduce savannas and grasslands habitats, and the species which rely on them for survival, including Zebra and Wildebeest. Saving The Survivors closely monitors Elephant population densities, supplying immune contraception where necessary to manage the birth rate in areas. This method is chosen to avoid the risk of government culling in the future.

Lions are also collared for similar reasons to Elephants, predominantly to give warning to local communities and avoid any human-wildlife conflict. Dispersal Lions (relating to the male Lions cast out of their pride once they become of breeding age) are particularly concerning to local communities as they can travel in groups of two or more, with ranges exceeding 200km in search of mating females. Saving The Survivors intervenes by dispersing these males and relocating away from human habitats.

Saving The Survivors believes that conservation is best achieved through local community engagement and empowerment. This is established by visiting local schools and organisations and providing environmental education. These programs aim to demonstrate the value in conserving wildlife in order to achieve a more sustainable future for subsequent generations. With increased appreciation of the wildlife around them, this also helps to mitigate the human-wildlife conflict which has existed for thousands of years.