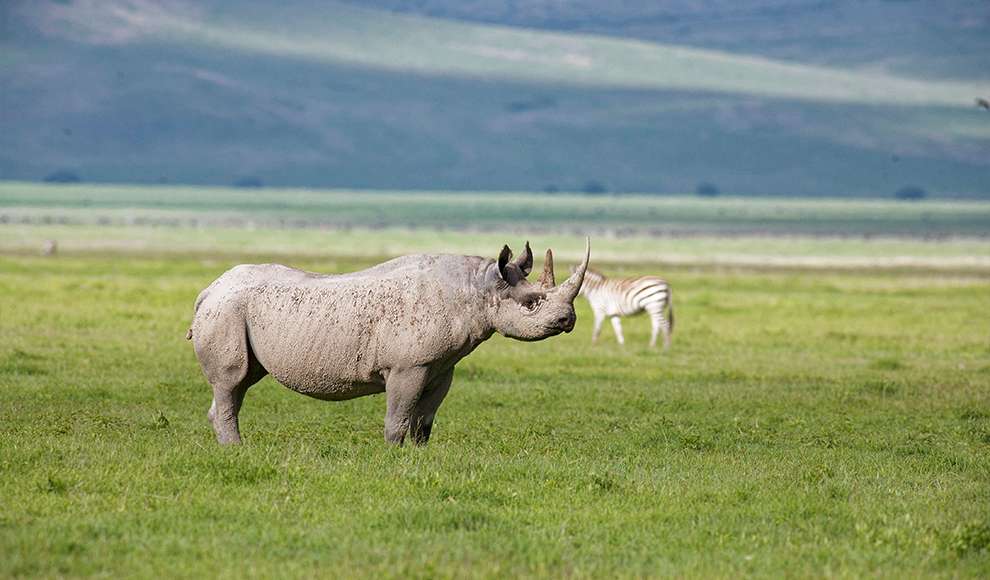 Black Rhinos are the smaller of the two African Rhino species. Black Rhinos differ from White Rhinos by having a distinguished hooked upper lip which has adapted to allow them to feed on leaves and bushes. Similar to the White Rhino, Black Rhino have two horns, although they occasionally also have a small third posterior horn. There are three subspecies of Black Rhino, with a previous forth subspecies which is now extinct.

The three subspecies of Black Rhino are found in the Eastern and Southern African countries, with strongholds residing in South Africa. The Black Rhino was considered the most numerous out of all Rhino species throughout the 20th century, however countless decades of hunting and habitat destruction for settlements and agriculture reduced numbers to 100,000 in 1960. In the 30 years which followed, large-scale poaching occurred resulting in a decline of 98% of the population. Since the mid 1990s, the species has comeback from the brink of extinction, with numbers more than doubling, reaching an estimated 5,495 by the end of 2017. This would not have been possible without countries’ investments into conservation and protection. Four range states (South Africa, Namibia, Kenya and Zimbabwe) now conserve 93.9% of remaining wild Black Rhino.

Black Rhinos can be found in a variety of habitats from arid desert areas in Namibia to wetter woodland environments. The largest population of Black Rhino are found in savannas and on nutrient- rich soils. Unlike their White Rhino relatives, Black Rhinos are browsers, meaning they mainly eat palatable woody species, herbs and succulents, with a particular favourable food being small acacia’s.

Rhinos are keystone species, meaning they play a critical role in shaping their habitats and altering ecosystems. They are mega-herbivores meaning that their diet consists mainly of plant species. Black Rhinos being browser animals are natural pruners. By eating leaves from trees and shrubs they maintain plant growth, preventing certain vegetation chocking others. This has ripple effects on other plants and animals.

Rhinos also play a key role in reshaping the land and creating and maintaining natural waterholes by wallowing in mud puddles. This not only allows other species access to water sources needed to survive, but the mud accumulated from wallowing enriches soils in surrounding areas as it dries up and falls off, allowing for plant species to thrive.

Rhinos, being mega-herbivores, consume more than 50kg of vegetation every day, depositing around 20kg of dung. This dung is deposited around territories of male Black Rhino in dune middens, which are piles of dung periodically returned to and build upon. The dung acts as a fertiliser for the soil, allowing plant species to survive, as well as providing a suitable habitat for dung beetles.

Rhinos, being one of the big 5, play a critical role in attracting tourists into national parks, allowing for economies to develop. Black Rhinos offer ecotourism which is an important source of income for countries such as Namibia.

Black Rhino are vulnerable to poaching for their horns. This is a major cause of individual death, with an average of 3 Rhinos poached daily in South Africa alone, leading to population decline. Rhino horns have traditionally been used in Chinese medicine, as a method to reduce fever. Rhino horn is also used as ornaments, with recent interest in carving Rhino horns to make high-status items such as bowls. Despite the level of poaching, populations of Black Rhino are continuing to grow on a continental level, albeit poaching is slowing the overall growth, with some regions experiencing population declines. Poaching levels increased dramatically since 2007, increasing protection cost and risk. This results in a reduced incentive to conserve these animals, with some private owners in South Africa actively selling their remaining Rhino. This threatens to restrict the already reduced habitat range of these animals and threatens to reduce conservation budgets and incentives to protect Black Rhino.

Trophy hunting industries still operate in some African countries including Botswana, Mozambique, Namibia, Tanzania, South Africa and Zimbabwe. In South Africa, there are strict controls on hunting Black Rhino as they are critically endangered, with only 5 hunting export permits issued each year. There is an ongoing debate as to whether trophy hunting benefits conservation as the revenue created has potential to fund wildlife conservation efforts if used correctly, whilst the act of hunting could also help maintains the biodiversity of ecosystems.

Black Rhinos have suffered from habitat loss and fragmentation resulting from human population expansion and land conversion to agriculture and human infrastructure. With projected human population growth, land conversion is expected to accelerate in future decades, increasing the human-wildlife conflict due to increased contact between humans and Rhino.

The range of Black Rhino may be further reduced in the future due to climate change increasing the frequency and severity of droughts. This limits the amount of freshwater needed for survival, forcing Rhino to venture further into local communities in search of water, increasing the human-wildlife conflict. The associated increased risk of bushfires from droughts also threatens further loss of habitat and potentially forces humans to relocate in protected or semi-protected areas.

Saving The Survivors (STS) have been involved in assisting several reserves with practices related to the management and conservation of Black Rhino. This includes immobilisation with collaring and tracking, as well as removing snares from these animals and treatment of the wounds in the following weeks to months.  This has been performed in both private reserves as well as National Parks.  STS have also assisted with the monitoring and tracking of Black Rhino in East Africa, with the provision of much needed equipment.

STS have also assisted a Rhino orphanage that cares for both White and Black Rhino. Diagnosis through radiology and treatment of injured Black Rhino has proven invaluable in maintaining Black Rhino feet on the ground.