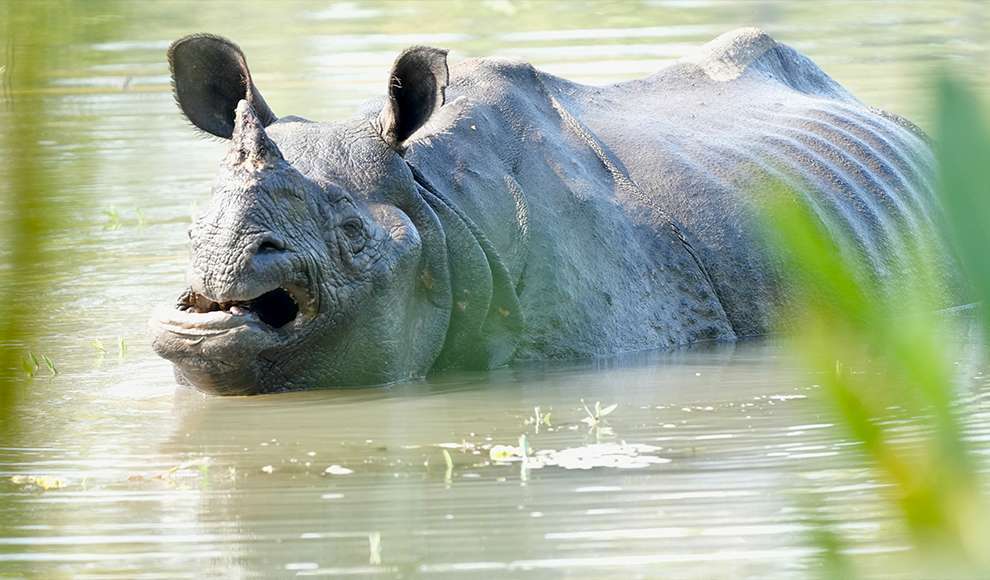 The Greater One-horned Rhino, also referred to as the Indian Rhino, is the largest of all Rhino species. They have one horn which is approximately 8 to 25 inches. Its skin folds, giving an amour-plated appearance.

Historically, the Greater One-horned Rhino existed across the entire Northern part of the Indian subcontinent, including parts of Nepal, Bhutan and Bangladesh. The species was widespread across North-western India and Pakistan until the 17th century. From 1600 to 1900 the species density declined sharply, leaving the Greater One-horned Rhino on the brink of extinction at the start of the 20th century.

With strict protection from Indian and Nepalese wildlife authorities, populations increased. In 2018 there was an estimated 3,588 individuals in total, equating to approximately 649 in Nepal and 2,939 in India. Its current range occupies eight protected areas across India and four protected areas in Nepal. Kaziranga National Park and Chitwan National Park are now home to 70% of the global population.

These animals are usually solitary, except for mothers with calves and during mating. The males ranges are not structured, with territories between males overlapping.

The Greater One-horned Rhino is a symbol of national pride across Asian countries where they are found, helping to inspire conservational efforts among local communities. With the protection of Greater One-horned Rhino habitats, many other species residing in the same habitat are also protected. The bounce back of the species from the brink of extinction also helps to inspire conservation efforts globally.

Greater One-horned Rhinos population declined dramatically to the brink of extinction at the start of the 20th century. This was primarily due to loss of habitat and conversion of alluvial plain grasslands to agricultural development, often leading to Rhinos leaving the boundaries of protected areas to forage surrounding villages. There is a future threat that with projected human population growth, human encroachment onto protected areas may increase, increasing the human-wildlife conflict.

The reduced habitat areas also had knock-on effects of increasing accessibility of Rhino to hunters. Sport hunting was legal and common in the late 1800s and early 1900s, playing a big part in reducing Greater One-horned Rhino populations. This resulted in governments banning the practice in order to protect remaining populations.

The illegal poaching of Rhinos is still a threat to the Greater One-horned Rhino, where their horns have been traditionally used in Asian medicine. Without continued conservation efforts in Nepal and India, the effect of poaching on population densities would have been far greater.

Whilst Saving The Survivors (STS) is best known for the emergency work performed on African Rhino species, including the Black Rhino and White Rhino, we also assist with any species in need further afield.

Through advancements in our medical knowledge and care of African Rhinos, we are able to further our collective knowledge of Rhinos and share our expertise with other organisations, including those who care for Asian Rhino species. This is due to the anatomical similarities of Rhino species. By sharing our knowledge, we are all better equipped in ensuring a future for these magnificent creatures.