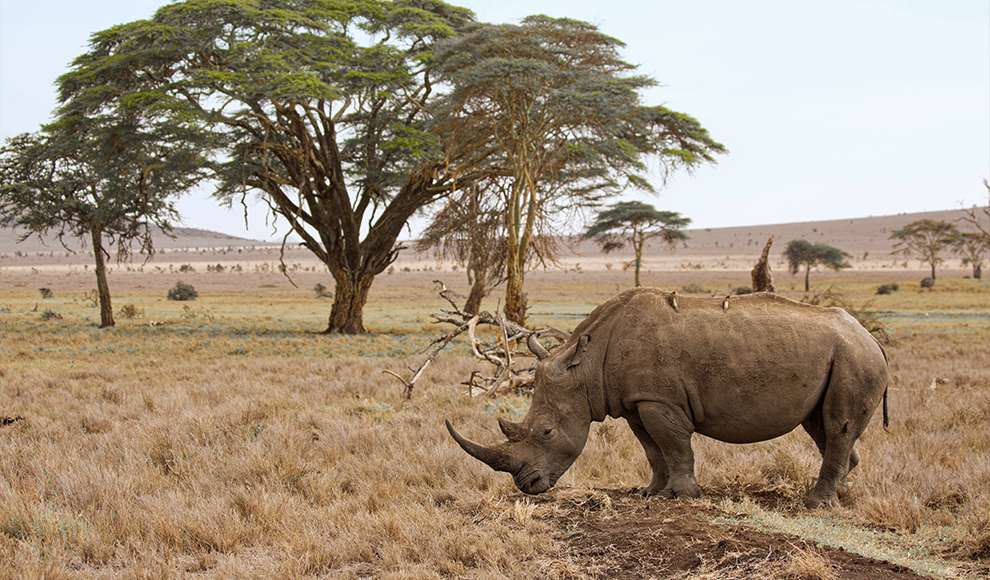 The name White Rhino comes from a misinterpretation of the Afrikaan’s word “weit” meaning wide, referring to the width of the animal’s mouth. This led to the name we have today, White Rhino. They are characterised by having long, barrel shaped bodies and two distinct horns which grow continuously throughout their life. There are two genetically different subspecies of White Rhino, referred to as the Northern and Southern White Rhino. The lineages of these subspecies diverged 0.5- 1 million years ago.

Historically, the Northern White Rhino ranged over Uganda, South Sudan, Chad, the Central African Republic and the Democratic Republic of the Congo. There have been numerous ground surveys, foot patrols and aerial reconnaissance over probable ranges of Northern White Rhino, however no live Rhinos have been sighted since 2006. In South Sudan, there remains a slight hope of the continued existence from unconfirmed report/rumours of Northern White Rhino, however these are not reliable and with continued conflict and poaching in the area, the likelihood of survival is low. The last four Northern White Rhino in captivity produced no offspring before the two old bulls died, and despite efforts crossbreeding is yet to be successful. The last two remaining females are thought to be the last ever Northern White Rhinos in existence and are classed as functionally extinct due to the lack of breeding. These two females live with 24-hour protection of armed guards in the OI Pejeta Conservancy in Kenya.

Southern White Rhino are the only species of Rhino which are not endangered. The species was thought to be extinct in the late 19th century with only one remaining population of 20 to 50 individuals residing in KwaZulu-Natal, South Africa. After years of conservation efforts and protection, populations rose to approximately 21,316 individuals by 2012. However, due to countless years of poaching, populations declined again to approximately 18,064 White Rhino in 2017, a decline of 15%. Approximately 99.3% of Southern White Rhino reside in just four countries (South Africa, Namibia, Zimbabwe, and Kenya), with South Africa being the stronghold despite increased poaching.

The Kruger National Park in South Africa recently reported a decline in numbers of poaching since 2016, however this is likely attributed to the lower populations of Rhino in the area. There are now more White Rhino on private land in South Africa than in any other area of the African continent. This has led to an increase in poaching of Rhino in private reserves where there is generally less protection. The resultant increased security costs and limited economic incentives has reduced conservation efforts and demand for White Rhino, leading to the sale of many live White Rhino.

White Rhinos are grazing animals and can be found in long and short grass savanna areas and in grasslands. The social structures of the species is complex, with groups often forming in sizes of around 14, comprising of females with calves. The habitat range of each group varies depending on the population density and habitat quality, although ranges of several square miles are common.

Rhinos are keystone species, meaning they play a critical role in shaping their habitats and altering ecosystems. They are selective mega-herbivores meaning that their diet consists of selective plant species, making them responsible for the biodiversity of grasslands. As they consume selective species, this allows more space for other plant species to grow which would not otherwise be able to, thereby increasing biodiversity.

Rhinos also play a key role in reshaping the land and creating and maintaining natural waterholes by wallowing in mud puddles. This not only allows other species access to water sources needed to survive, but the mud accumulated from wallowing enriches soils in surrounding areas as it dries up and falls off, allowing for plant species to thrive.

Rhinos, being mega-herbivores, consume more than 50kg of vegetation every day, depositing around 20kg of dung. This dung is deposited around territories of male White Rhino in dune middens, which are piles of dung periodically returned to and built upon. The dung acts as a fertiliser for the soil, allowing plant species to survive, as well as providing a suitable habitat for dung beetles.

Rhinos, being one of the big 5, play a critical role in attracting tourists into national parks, allowing for economies to develop.

White Rhino are vulnerable to poaching for their horns. This is a major cause of individual death, with an average of 3 Rhinos poached daily in South Africa alone. Rhino horns have traditionally been used in Chinese medicine, as a method to reduce fever. Rhino horn is also used as ornaments, with recent interest in carving Rhino horns to make high-status items such as bowls. The act of poaching until recently has not had a serious impact on White Rhino populations as the losses in parts have been surpassed by population growth rates in other areas. However, poaching levels increased dramatically from 2007 to 2014, leading to population declines and increasing the costs and risks associated with protection. This resulted in a reduced incentive to conserve these animals, with some private owners in South Africa actively selling their remaining White Rhino. This threatens to restrict the already reduced habitat range of these animals and threatens to reduce conservation budgets and incentives to protect the White Rhino.

Trophy hunting industries still operate in some African countries including Botswana, Mozambique, Namibia, Tanzania, South Africa and Zimbabwe. In South Africa, trophy hunting has been permitted for Southern White Rhinos since 1968. There is an ongoing debate as to whether trophy hunting benefits conservation as the revenue created has potential to fund wildlife conservation efforts if used correctly, whilst the act of hunting could also help maintains the biodiversity of ecosystems.

White Rhinos have suffered from habitat loss and fragmentation resulting from human population expansion and land conversion to agriculture and human infrastructure. With projected human population growth, land conversion is expected to accelerate in future decades. This will likely increase the human-wildlife conflict due to increased contact between humans and Rhino.

The range of White Rhino may be further reduced in the future due to climate change increasing the frequency and severity of droughts. This limits the amount of freshwater needed for survival, forcing Rhino to venture further into local communities in search of water, increasing the human-wildlife conflict. The associated increased risk of bushfires from droughts also threatens further loss of habitat and potentially forces humans to relocate in protected or semi-protected areas.

Saving The Survivors (STS) provides veterinary care and support to White Rhino in several critical conservation areas across Southern Africa.  This includes treatment of injuries from poaching, gunshot wounds and territorial fights.  Several of these injuries are often a long-term commitment over several months to years, as it may cause severe lameness, affecting an animal’s ability to feed and walk properly.

STS supports Rhino owners with disease outbreaks, which can spread rapidly and be fatal to populations. We also assist with management practices like vaccinations, collaring and tracking, dehorning and relocation of individuals.

Additionally, STS has been involved in research into the anatomy of White Rhino. As very little is scientifically known about Rhino’s anatomy, it is imperative to learn, record and share vital information. Through the research done by STS, we are now able to more accurately and successfully treat sick or injured Rhinos as well as victims of poaching, both medically and surgically.

STS has provided advice to Rhino orphanages as well as been directly involved in the stabilisation and intensive care of orphaned baby Rhino. Continuous support of various Rhino orphanages has ensured the survival of orphans for future release and breeding.