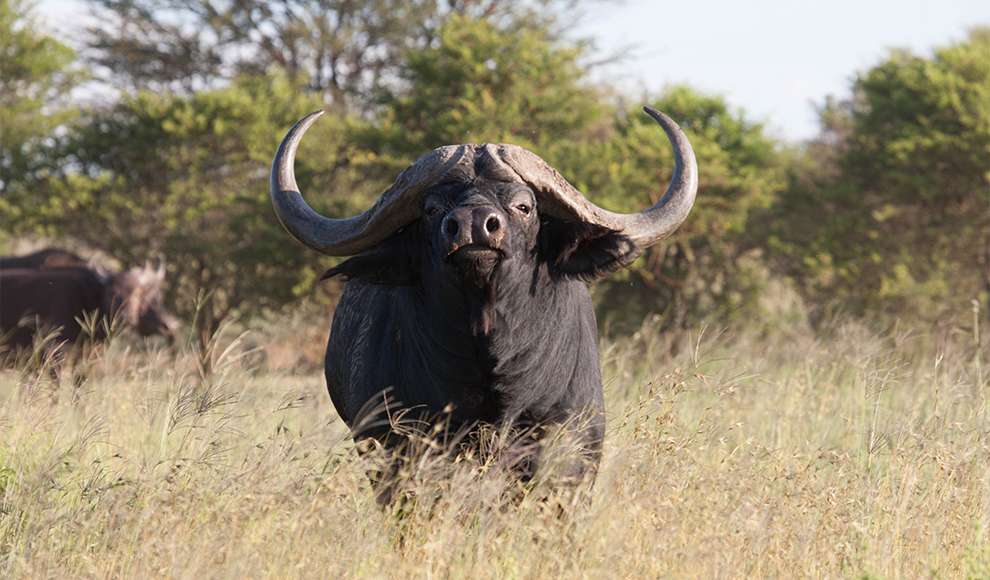 African Buffalo are large, cow-like animals with large upwards-curling horns. Their young are usually reddish-brown in colour, becoming darker with age. There are five subspecies of African Buffalo.

Historically, African Buffalo were distributed throughout much of sub-Saharan Africa. There is no evidence of the species ever being found in North Africa.

Since the 19th century, African Buffalo populations have steeply declined as a result of human encroachment, poaching, climate change and disease. Approximately 70% of savanna Buffalo are confined to small, protected areas, with surrounding hunting grounds. In the 20th century several countries culled African Buffalo in efforts to prevent transmission of pathogens like foot-and-mouth disease to cattle, leading to further reductions in populations.

African Buffalo occupy a wide range of habitats including forest, montane grassland, woodland, savanna, bushland and lowland rainforest. They are only absent from deserts. Rainfall is a limiting factor of African Buffalo population, only occupying areas with annual rainfall greater than 250mm.

African Buffalo gather in large herds of 50 to 500 individuals during the dry season, reaching numbers in the thousands during the wet season in the Serengeti. These large groups act as defence to dispute predators such as Lions, Leopards, African Wild Dogs and Hyaena.

African Buffalo play an integral role in the food chain for many carnivores, namely Lions, thereby regulating other species populations.

The main threat facing African Buffalo is the encroachment of humans onto their habitat, leading to habitat fragmentation. With projected human population growth, land conversion is expected to accelerate in future decades, increasing the human-animal conflict. Loss of habitat also makes African Buffalo easier targets for poachers, where they are favoured for the sale of their meat.

The range of African Buffalo may be further reduced in the future due to climate change increasing the frequency and severity of droughts. Buffalo are extremely sensitive to drought, with population declines in the Sahel during the 1960s and 1990s being acquainted to this. Drought reduce freshwater supplies needed for survival, forcing Buffalo to venture further into inhabited areas in search for water, increasing the human-wildlife conflict. The increased risk of bushfires associated with droughts also threatens further loss of habitat and potentially leads to humans relocating to protected or semi-protected areas.

African Buffalo are susceptible to a range of infectious diseases. During the 1890s, the rinderpest epidemic, coupled with pleuro-pneumonia caused up to 95% declines in populations of livestock of wild ungulates.

Saving The Survivors (STS) has been involved in the successful translocation of several herds of Buffalo into reserves where they previously occurred. Notably 117 Buffalo were moved from Sabié Game Park to Maputo Special Reserve as part of a larger rewilding project aimed at restoring the country’s conservation areas.

Additionally, several conflict Buffalo were captured and released in National Parks to prevent human-wildlife conflict. STS has also treated numerous Buffalo for lameness, due to either claw infections or severe osteoarthritis of the lower limb.