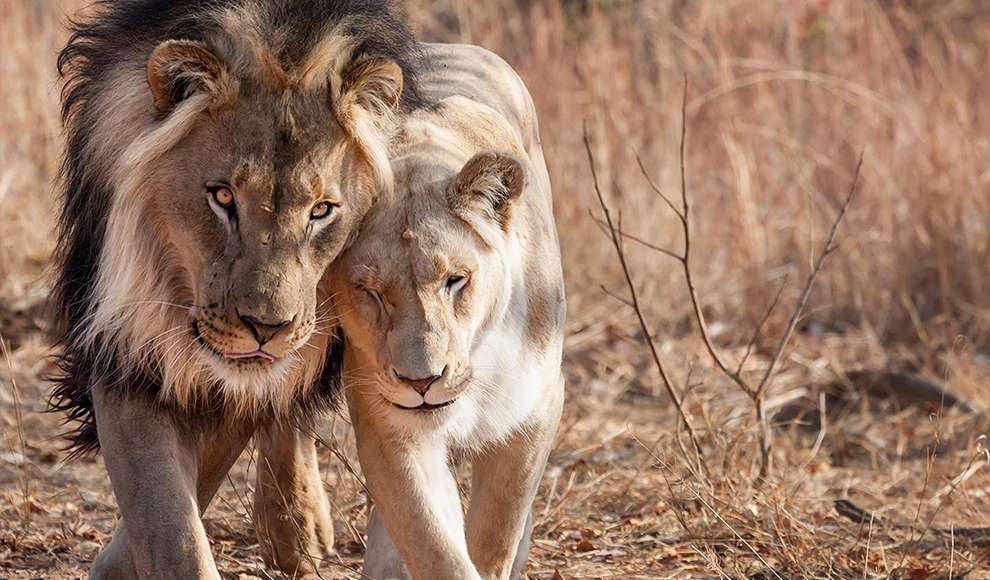 Lions are a part of the Feline (Felidae) family, with two separate species of Lions including the Asian and African Lion. Males are larger than females and characterised by having a predominant mane. Lions are historic symbols of strength as they are apex predators with no natural predators.

Lions former range included Sub-Saharan Africa, Northern Africa, Southwest Asia, Europe and India. Although, populations became extinct in Europe around 2,000 years ago and disappeared from most Northern African and Southwest Asian countries within the last 150 years. The last populations in North Africa occupied the High Atlas Mountains, dying out in the 1940’s. The once widespread Northern populations are now restricted to a single isolated subpopulation in the Gir Forest National Park and Wildlife Sanctuary.

African Lions can tolerate a high variability of habitats, being only absent from tropical rainforests and the centre of the Sahara Desert. Lions have the ability to obtain their required moisture from prey and plants, meaning they are well adapted to surviving in very arid environments. Lions are also adapted to survive in a range of elevations, with populations reported up to 4,000m on Kilimanjaro and the Bale Mountains.

Lions are carnivores meaning they mostly eat meat, or the flesh of animals. The bulk of their prey includes Antelope, Zebra and Wildebeest, although Lions have been seen to prey on larger animals including Rhino.

Lions are the most social big cats, living in prides consisting of related females and unrelated mates competing for dominance. A pride usually consists of four to six adults.

African Lions are keystone species, meaning they play a critical role in shaping their habitats and altering ecosystems. They are apex predators, playing a crucial role in regulating populations of their prey, especially herbivores such as Zebra and Wildebeest. Without Lions herbivores would overconsume grasslands and forests, leading to less food available for other species and an unbalanced ecosystem. Similarly, Lions help to maintain healthy populations of herbivores by usually preying on the sickest, weakest and oldest animals.

African Lions, being one of the big 5, play a critical role in attracting tourists into National Parks, allowing for economies to develop. These creatures are also held with historic significance, being symbols of bravery and courage.

African Lions face threats from prey depletion. The wild herbivores which comprise the majority of Lions diets are under threat from the unsustainable bush meat trade, leading to lower populations. This limits the food resources for Lions and other predators, thereby limiting population growth.

Habitat loss poses a significant threat to current and future populations, leading to smaller more fragmented subpopulations. This results from human population expansion and land conversion to agriculture and human infrastructure. With projected human population growth, land conversion is expected to accelerate in future decades, increasing the human-wildlife conflict due to increased contact between humans and Lions. Currently, conflicts with humans arise due to the perceived threat to their commercially valuable livestock being taken as prey and the threat to their lives.

The range of African Lions may be further reduced in the future due to climate change increasing the frequency and severity of droughts. This limits freshwater supplies needed for survival, forcing Lions to venture further into inhabited areas in search for water, increasing the human-wildlife conflict. The increased risk of bushfires associated with droughts also threatens further loss of habitat and potentially leads to humans relocating to protected or semi-protected areas.

Trophy hunting industries still operate in some African countries including Botswana, Mozambique, Namibia, Tanzania, South Africa and Zimbabwe. There is an ongoing debate as to whether trophy hunting benefits conservation, as the revenue created has potential to fund wildlife conservation efforts if used correctly, whilst the act of hunting could also help maintains the biodiversity of ecosystems. The ICUN reports trophy hunting to have a net positive impact in some areas, although population declines in Botswana, Namibia, Tanzania, Zimbabwe and Zambia have been attributed to trophy hunting amongst other factors.

African Lions are vulnerable to poaching for their bones, skins and other body parts considered to be of medical value in many parts of Africa and with increasing interest in Asia. In China, the use of bones from captive big cats is permitted to make medical wines and so represents a legal international trade, although could serve as a cover for illegally sourced Lion parts from South Africa. Traditional medicine markets also contain many fake Lion commodities, demonstrating the continued high demand for these products.

Lions are collared to give warning to local communities and avoid any human-wildlife conflict. Dispersal Lions (relating to the male Lions cast out of their pride once they become of breeding age) are particularly concerning to local communities as they can travel in groups of two or more, with ranges exceeding 200km in search of mating females. Saving The Survivors intervenes by dispersing these males and relocating away from human habitats. We have provided support to both private reserves and National Parks in the form of translocations, as well as collaring and tracking of Lion to determine if they leave the confines of the park, preventing conflict and interaction with humans and domesticated animals.  It is also an effective way of keeping track of these animals’ movements and demographics and learning about their ecology and population structures.

STS has been instrumental in treating several Lion with severe wounds from gintraps and other snares which are associated with poaching activities. Thankfully the procedures have been very successful and in all cases the Lions went back and hunted for themselves.