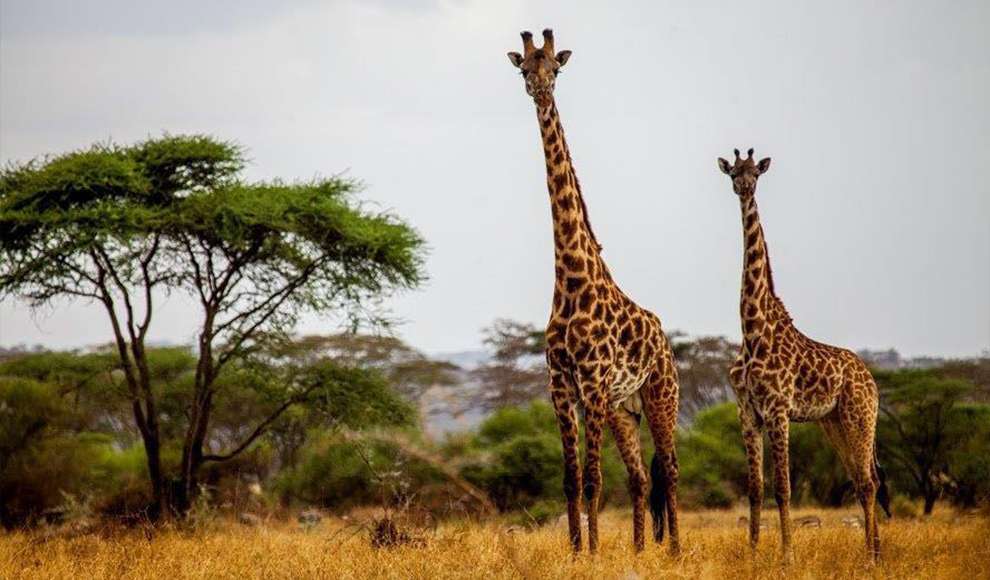 Giraffes are the tallest terrestrial animal in the world. They are characterised by their incredibly long legs and neck. Their head contains 2-5 small horns which are covered in skin and often used as defence weapons. There are four different types of Giraffe species and several sub-species.

Giraffes are keystone species, meaning they play a critical role in shaping their habitats and altering ecosystems. They consume browse which other animals cannot reach, opening up areas for themselves and smaller species, whilst also promoting the growth of forage. They also play a crucial role in spreading seedlings with some Acai tree seedlings only germinating after they have passed through a Giraffes digestive system.

There are four main threats to Giraffes, including habitat loss, civil unrest, poaching and climate change. Habitat loss and fragmentation results from human population expansion and land conversion of forests to agriculture and human infrastructure. With projected human population growth, land conversion is expected to accelerate in future decades. This will further reduce Giraffes ranges, leading to increased contact with humans, worsening the human-wildlife conflict.

Giraffe tails are sought after in many parts of Africa, increasing the poaching of these animals. They are also poached for their hair which is used for sewing. Herbal medicine practitioners have also claimed that their meat, bone marrow and brains can protect people from HIV/AIDS, raising the price for these animals and increasing poaching.

The range of Giraffes may be further reduced in the future due to climate change increasing the frequency and severity of droughts. This limits freshwater supplies needed for survival, forcing Giraffes to venture further into inhabited areas in search for water, increasing the human-wildlife conflict. The increased risk of bushfires associated with droughts also threatens further loss of habitat and potentially leads to humans relocating to protected or semi-protected areas.

Whilst Saving The Survivors (STS) is best known for the emergency work carried out on Rhinos, due to the countless poaching incidents they endure, STS will also assist any other species in need.

STS has been involved in the treatment of several snare injuries on Giraffe, both in South Africa and Mozambique in private nature reserves and National parks.

STS is involved in a world first attempt to tame-down a three-legged Giraffe in order to provide the animal with a prosthetic due to the loss of its lower hind limb in a snare. In collaboration with other animal professionals, STS hopes to provide a better quality of life to this Giraffe as well as adapt the lessons learned from this case to any large animal wildlife species, that may need it.