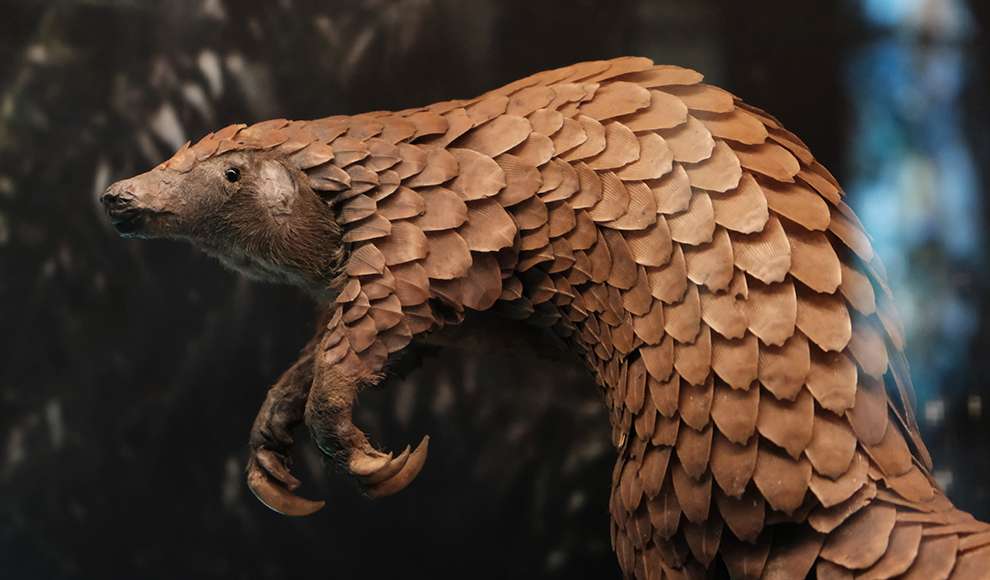 Temminck’s Pangolin (also known as the Ground Pangolin) is one of eight species of Pangolin which can be found in Africa and Asia. Pangolins are mammals which are distinguished by their armoured, overlapping scales, which are effective in protecting them from predators. These scales are made up of keratin, and do not cover the underside. When pangolins feel threatened, they roll up into a ball, protecting their softer belly.

Temminck’s Pangolin occupies a variety of habitats, including savannas, woodlands, floodplain grasses, rocky slopes and well-managed livestock farms where it gains protection from human persecution. This species hasn’t been found in forests or true deserts, as well as cropland and human settlements.

Pangolins are predominantly solitary animals, only coming together briefly for mating and mothers rearing their offspring for approximately 3-6 months.

The species is water independent but will facilitate free-standing water when available. Their diet largely consists of various ant and termite species.

Pangolin are considered keystone species, meaning they play a critical role in shaping their habitats and altering ecosystems. This is due to them functioning as ecosystem engineers by burrowing. These burrows are then used by other mammals, and the turning over of soil during digging helps to aerate soil, leading to improved plant germination.

The diet of Pangolins consists mainly of ant and termite species. It is estimated that Pangolin consume around 70 million termites and ants each year, which has knock on effects to the vegetation termites and ants consume, and in turn impacts the diets of all herbivore species. Without Pangolin, ants and termites’ populations would increase and deplete vegetation, impacting a large range of herbivore species.

Pangolin are sought after for their body parts and scales which are used in Africa and Asia for medicinal purposes and superstitious value. In many regions in Africa, Pangolin scales are widely believed to bring good luck and rain, leading to high demands. With the depletion of many Asian Pangolin populations, this has led to increases in poaching and the illegal trade of African Pangolin. Pangolin scales are viewed as the same value as Rhino horn and ivory, despite being made from keratin, the same material as our fingernails. Since 2010 there has been a dramatic increase in the number of Pangolin seized from illegal trade. By 2012, Pangolin were recorded as the most trafficked animal worldwide.

Temminck’s Pangolin have suffered from habitat loss resulting from human population expansion and land conversion to agriculture and human infrastructure. This increases access to Pangolin, resulting in higher levels of poaching. It is likely that with projected human population growth, land conversion will accelerate in future decades, further reducing habitats for Pangolin. This will likely increase poaching and the human-wildlife conflict as there will be increased contact between Humans and Pangolin.

With the introduction of electrified fences across much of South Africa in order to protect local communities and keep wildlife out, Temmnicks Pangolin are regularly being electrocuted. This represents 2-13% of the mortality rate in South Africa each year.

Whilst Saving The Survivors (STS) is best known for the emergency work performed on Rhinos, due to the countless poaching incidents the species experiences, we also assist with any other species we are called upon to help. In some cases STS have been called to assist with Temminck’s Pangolin. We have been involved in the rescue and treatment of this species.