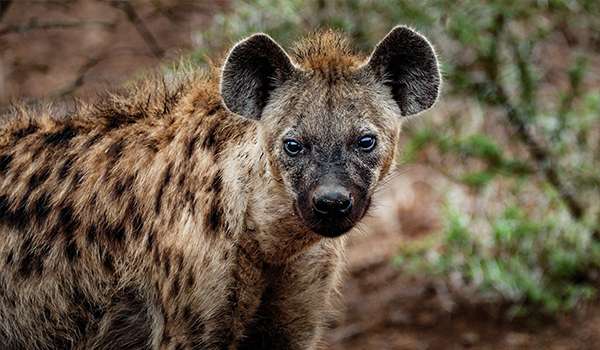 There are three species of Hyaena in Africa, who’s lineages split around 8.6 million years ago: Brown Hyaena, Spotted Hyaena, Striped Hyaena. The Spotted Hyaena, also known as the laughing Hyaena is distinguished from the other two species by having a spotted pelt with rounded ears and a muscular neck. They also have powerful jaws giving them a strong bite.

Spotted Hyaenas are widely distributed south of the Sahara, although mostly confined to protected areas and limited isolated numbers in West and Central Africa. Higher populations exist within countries including Chad, South Sudan, parts of South Africa, Kenya, Angola, Tanzania, Botswana, Ethiopia and Namibia. The largest populations exist within Tanzania and Kenya in the Serengeti ecosystem (7,200-7,700 individuals in Tanzania and 500-1,000 in Kenya), and within Kruger national park in South Africa (1,300-3,900 individuals).

Unlike their striped and brown relatives, the Spotted Hyaenas is regarded as an effective hunter as well as a scavenger. Their prey varies depending on location, however, mostly consists of Wildebeest, Zebra, Impala and Gazelles. Their threat to livestock varies in intensity, but involves cattle, sheep, and goat.

Spotted Hyaenas are social animals, forming large clans of up to 100 members. The females are larger than the males and so the hierarchy is matriarchal. Cubs take the rank directly below their mothers. The females typically stay within their natural clan whereas males are seen to disperse at approximately 2.5 years of age.

Hyaenas are keystone species, meaning they play a critical role in shaping their habitats and altering ecosystems. Spotted Hyaenas being hunters play a crucial role in maintaining healthy prey populations by usually hunting the weakest, oldest and sickest members.

As scavengers, Spotted Hyaenas are also crucial for removing remains of dead animals from its habitats. This helps to prevent any harmful bacteria and diseases which accumulate on rotting flesh over time, helping to maintain a healthy ecosystem.

Spotted Hyaena are portrayed as threats to humans and their livestock. When conflict arises with humans, the likely outcome is Hyaenas being shot, poisoned, trapped or hunted with dogs to eradicate populations. Within protected areas there have been cases of government officials allowing human residents to kill Spotted Hyaena when they interfere with their livestock.

Snares which are used to trap bush meat are also significant risk to Spotted Hyaena, particularly in the Serengeti where approximately 400 adults are killed each year. This is a significant cause of adult mortality rates, responsible for more than 50% of adult deaths.

Human population expansion and land conversion to agricultural land, mining and human infrastructure has resulted in reduced population of Spotted Hyaena due to declines in prey densities. With projected human population growth, land conversion and urbanisation is expected to accelerate in future decades. This will further reduce habitat areas for Spotted Hyaena and their prey, leading to increased human-wildlife conflict.

STS has been involved in a historic translocation of four Spotted Hyaena from Sabie Game Park to Zinave National Park. The clan are the first large predators in the area for four decades, whilst also being a scavenger. This re-introduction is to ensure the ecosystem of Zinave remains healthy and disease free.