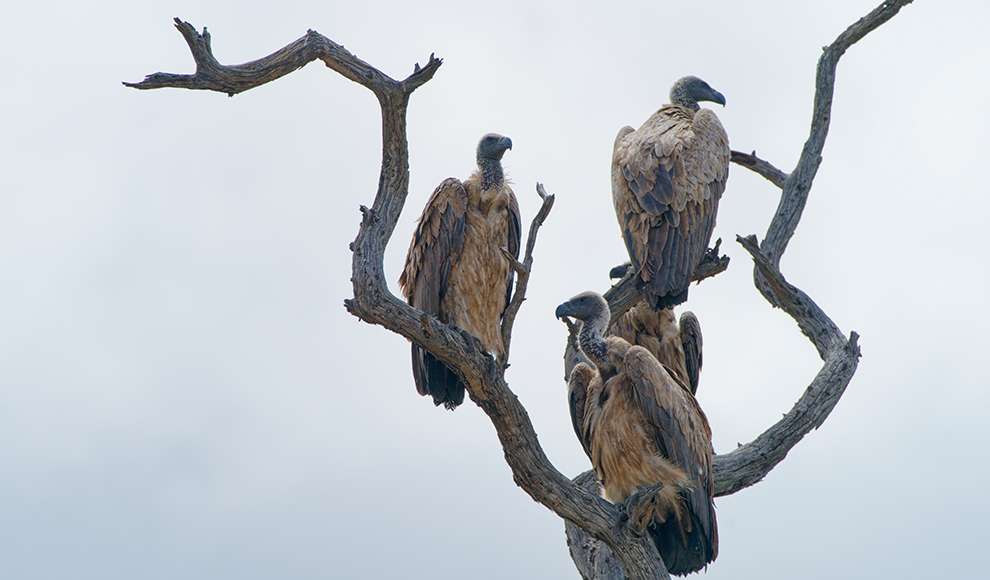 Historically, White-backed Vultures were widespread and common across Africa, although now the species is experiencing rapid declines. In 1992, the global population of White-Backed Vultures was estimated to be 270,000, being found over many regions in Africa. Today, White-backed Vultures are found in regions including Mali, Senegal, throughout the Sahel, Zimbabwe, Mozambique, and in South Africa. Regional variations in population disturbances exist, although average rate of decline is 4.1% each year. In West Africa alone, the species has experienced a decline of 90% of its individuals. Populations across southern Africa seem more stable, although if exploitation continues at the same rate, it is suggested that the species could become extinct in South Africa in 2034 or sooner.

White-backed Vultures are primarily lowland species, living in open wooded savanna. They require large trees to make nests which are crucial for roosting and nesting. Some Vultures have been seen nesting on electricity pylons in South Africa.

White-Backed Vultures are scavengers, meaning their diet consists of consuming animal carcasses. They circle the skies in search of dead animals, often following other scavengers and carnivores to find them. Once located, other vultures are signalled by wheeling in the sky. They only consume animals with soft tissue, as their beaks cannot tear through tough skin.

Vultures are keystone species, meaning they play a critical role in shaping their habitats and altering ecosystems. By consuming carcasses of dead animals before the flesh rots, this prevents the growth of dangerous bacteria, removing deadly toxins which may pose a threat to other wildlife.

All African Vultures, including the White-backed Vulture, have suffered from habitat loss resulting from human population expansion and land conversion to agriculture and human infrastructure. With urbanisation, there is increased risk of electrocution on powerlines. It is likely that with projected human population growth, land conversion will accelerate in future decades, further reducing habitats for African Vultures, putting many species at risk.

A major threat facing African Vultures is direct and indirect poisoning. Vultures may be poisoned in order to prevent attraction to poaching activities which occur on other animals. This is done by poachers lacing carcasses with pesticides in order to prevent Vultures circling the sky, altering park rangers. Similarly, pesticides such as Carbofuran and Furadan are used by agricultural and livestock owners to poison animals which pose threats to their livelihood, such as Lions or Elephant. Once an animal digests the pesticide they are killed. This is then passed along the food chain, killing any scavengers such as Hyaenas and Vultures. In 2012, in Conarezhoue National Park, Zimbabwe, mass poisoning events killed at least 144 White-backed Vultures after consuming an Elephant carcass.

In many parts of Africa, Vulture’s face threats from traditional medicine trades due to the perceived medicinal and psychological benefits. In South Africa, White-backed Vultures are the preferred Vulture species for traditional healers and traders, leading to an increased demand.

Saving The Survivors (STS) has been involved in data collection and reporting on poisonings affecting Vulture populations in and around National Parks. STS has examined and analysed poison samples removed from the field, to determine the most likely source and type of poison used. This is quite important as these chemicals are highly poisonous and if not removed timeously, will affect the death of many other mammals and bird species.