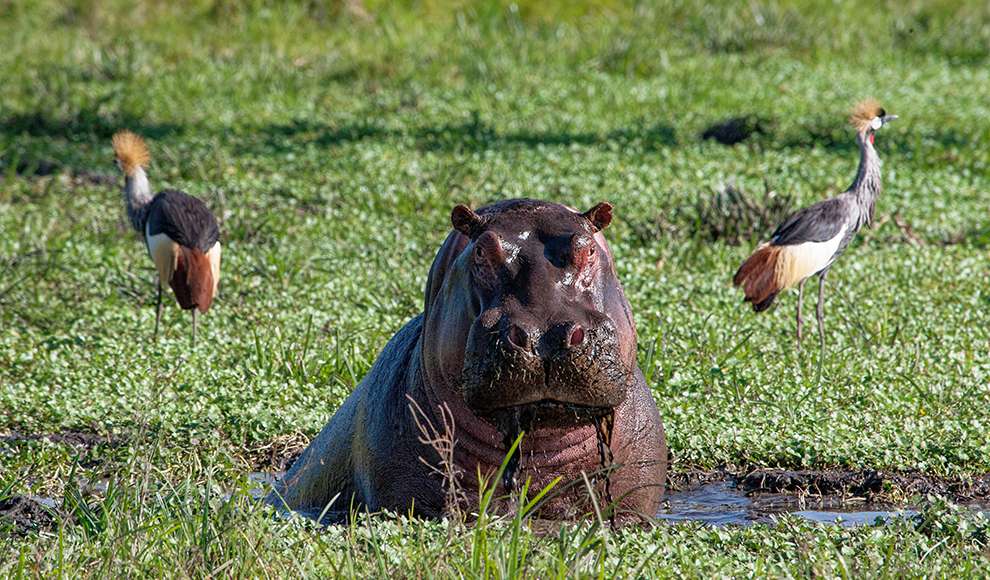 Hippopotamus, referred to as Hippo are large semi-aquatic mammals with thick hairless bodies, large heads, short legs and short tails. They are grey in colour, with a pinker belly.

Hippos are still found in most of their former range, occupying many countries throughout sub-Saharan Africa in wetland habitats. Although Hippos were once common throughout the Nile River system, they are now only found south of Sudan. Over the past ten years the populations of Hippos have declined 7-20%.

There are approximately 115,000-130,000 common Hippos today, although there are clear regional differences in population sizes. The largest distributions of Hippo are found in eastern and southern African countries, representing a stronghold for conservation. There are an estimated 50,000 Hippos in eastern Africa, and 60,000 in southern Africa.

Hippos are amphibious creatures, spending the day submerged in water, only emerging during nights to feed. Their diet consists mainly of grass foraged at various distances from water sources. Hippos rely on water sources for survival, if their skin is exposed to air for long periods of time it will crack. They are protected from the sun by secreting a red liquid from subdermal glands which acts as a sun cream and antibiotic.

Hippos are social animals, with herds ranging from tens to a hundred. Males tend to monopolize a section of the shoreline from the waterbody, only allowing other males which are submissive in their territory. In the event of a bachelor challenging a territorial male, severe fights can occur for control of territory. Females and young tend to keep together in groups.

Hippos are keystone species, meaning they play a critical role in shaping their habitats and altering ecosystems. Their forging activities profoundly affect the structure and dynamics of both their terrestrial and aquatic ecosystem habitats.

The excrement of Hippos plays a crucial role in regulating the health of Africa’s rivers and lakes. Unlike other grazing animals, the nutrients in Hippo’s excrements are deposited in water bodies where they act as a nutrient pump from terrestrial to aquatic environments.  The grass which Hippo’s graze on contain high amounts of silicon, this accumulates each day and is deposited in water bodies via excretion, acting as a fertilizer.

The main threat facing Hippos is the encroachment of humans onto their habitat, leading to habitat loss and fragmentation. This also increases the human-wildlife conflict as Hippos and Humans are coming into more regular contact with each other. As Hippos rely on water sources for survival, this creates greater tensions with humans, given the growing pressure on freshwater resources across Africa. With projected human population growth, land conversion is expected to accelerate in future decades, increasing the human-animal conflict. Similarly, with climate change, the predicted increased severity and frequency of droughts further threatens loss of habitat.

Poaching of Hippo has historically been high, especially in areas of civil unrest. In the Democratic Republic of Congo, 95% of Hippo populations were hunted over a period of 8 years of civil unrest. They are often killed for their meat, fat and ivory canine teeth which are considered highly valuable. With the ban of Elephant ivory being achieved in 1989 through extensive conservation work, buyers are looking for alternatives. This has led to a 530% increase in Hippo teeth export annually.

Although Saving The Survivors (STS) is best known for the emergency work performed on Rhinos, due to the countless poaching incidents, we also assist any animal in need we are called upon to help.

STS have assisted with a Hippopotamus which was caught in a snare trap in Mozambique. When our vets attended the scene, they found the cable snare was attached to a heavy log in a body of water. This was done deliberately by the poachers, to slowly exhaust the animal until it gets stuck, making poaching the ferocious animal much easier. Subsequently, the Hippos movements were severely restricted for the 2 weeks prior to being found, causing a severe decrease in body condition. Our vets managed to free the Hippopotamus, and luckily, he hadn’t sustained any serious injuries, making a full recovery.