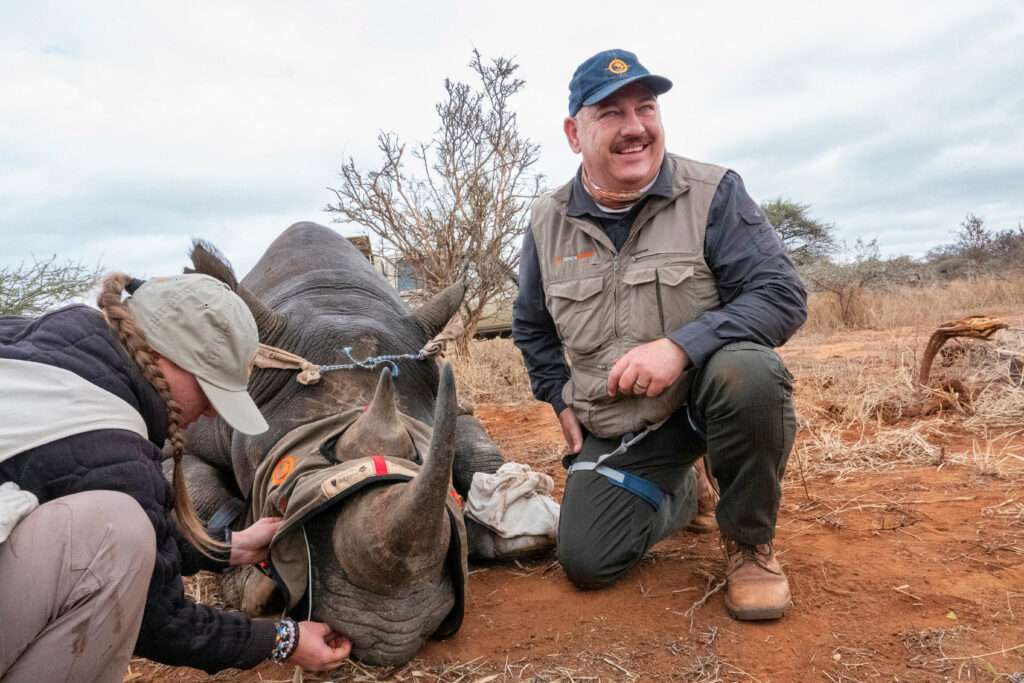 What type of animals do you most often come across and work with?

There are two species of rhino that we mainly work with, the black rhino and the white rhino.

What adaptive traits do these animals have?

The black rhino has a specially adapted prehensile pointy lip that is used for browsing. They also have no large hump on the back of their neck. This allows them to lift their heads high up to reach leaves up in trees. Contrastingly, the white rhino has a wide flat mouth that is perfect for grazing.

The white rhino however has a thick hump on the back of their necks. This prevents them from lifting their heads high as a black rhino. This is useful for absorbing massive blows during fights.

The difference in mouth adaptation and therefore dietary differences leads to a difference in habitats. This further leads to other physical adaptations (e.g. the lack of a neck hump in the black rhino) necessary to survive in their respective habitats.

How do these animals use their adaptive traits within their ecological niche? How does this increase their chances of survival?

Black rhino with their prehensile lips are able to browse from trees and bushes as well as graze grass. This makes living in thick bushy areas perfect for them. However thick bush environments have their challenges. One challenge is that sounds are dampened by the surrounding vegetation. Black rhino have adapted to this by having much larger, wider and rounder ears than their white rhino counterparts. The larger round ears help to catch and funnel any sounds nearby. This alerts the generally more aggressive and defensive black rhino of any dangers that they may not see beyond the thick foliage.

Contrary to the black rhino, the white rhino have smaller and narrower tube-like ears and tend to be more placid than aggressive. This is due to their open savanna habitat where sounds travel from far and are easily heard. Therefore much less chance of being surprised out in the open and less need to be aggressive but rather more relaxed.

Should any rhino become threatened or under attack, its strong and sharp horns are used as a defence mechanism. They use these for fighting off predators and other rhinos who challenge for territory. Their thick skulls and muscular bodies are well adapted to endure heavy blows from its opponents, thus increasing its chance of survival.

Which adaptive trait is the most beneficial and vital for each specimen?

Rhino are incredible and ancient specimens, having developed over millions of years. They have changed their traits over the eras in order to adapt and survive. One example was growing thick hair during the ice ages. Every trait in these specimens works together to make it one of the most powerful and successful mammals.

Certainly without its mouth, it won’t be able to eat and therefore survive. However, without its sense of smell it would not be able to find water which is also necessary for survival. Having a thick skin and a sharp long horns to protect itself and its offspring is also vital for their survival.

As wildlife caretakers and vets, we need to look at the animal as a whole and appreciation that one small factor can influence the whole bodily system. Every part of the rhino is vital.

Do biotic or abiotic factors have a bigger impact on determining which adaptive traits develop?

At this day and age, with human interference and subsequent results of humans, there are major and catastrophic impacts on the changes in adaptation. This is not only in the rhino species, but in their predators behaviours as well. With habitat loss and poaching on the rise, these animals are put under extreme stress. The predators however are benefiting as a result of rhino poaching. In recent years, it has been noted that predators such as lions, hyena, and leopard have changed their behaviour drastically.

Previously, when a gunshot was heard in the bush, most animals would flee. However, since the pandemic of rhino poaching, predators have learned that the sound of a gunshot indicates an easy meal. This will be as the carcass of a poached rhino, or the defenceless young calf whose mother had been poached.

Rhino orphanages and sanctuaries have noted a marked increase in rescued orphans arriving with predator-inflicted wounds. This includes scratches from claws, bite wounds and loss of body parts such as ears and tails. With the rhino poaching crisis escalating so quickly, the rhinos do not have the time to develop defensive traits in order to adapt to the situation.

Which animal has the best and worst fitness and why?

Both black rhinos and white rhino have their strengths and would be better than the other depending on which aspects of fitness you are considering. Black rhino are able to run much faster (up to 55km/h) than the white rhino counterpart, but only for short distances. The white rhino, although relatively slower (between 40-50km/h), can run for a longer time or distance.

What is the main mechanism behind the genetic variation within the population of the species, gene flow, genetic drift, natural selection or mutations?

With the numbers of rhino declining rapidly, the opportunity for any of the above to take place is incredibly difficult to succeed. Fragmented populations throughout the country within both private and public sectors does not allow for natural, free movement of rhino which would result in natural gene flow. Low sub-population number and the rapid decline in numbers due to poaching hampers any progress towards natural mutations, genetic variations and genetic drift occurring. The only solution for this problem would likely be the exchange of specimens for breeding programs between the various rhino custodians. This would increase the genetic variation and diversity of the meta population of rhinos.

Have you witnessed any evolutionary changes within one of these species?

Not in our lifetime. Rhino have been out of the spotlight and not studied until the poaching crisis hit. Now that these species are being closely guarded, treated, carcasses found, we are only now able to intensively study them.

Very little information is available regarding the rhino species, scientific or otherwise. Sanctuaries are working closely with veterinarians and researches to collect various data. This is from behavioural studies, to medical treatments that work and don’t work. We are also monitoring growth and development of orphaned rhino,  along with their physiological changes. The individual differences between rhinos is also being studied. This is all linking back to any historical data related to the animal such as location, season, age, injury and time elapsed between the death of the mother to the rescue of the orphan. We are quickly learning vital information on these rhino and how to save them. However, funding and time is a huge constraint to saving these rhino.

What are the biggest factors that lead to these evolutions or changes within the species, climate change, humans, parasites, sickness, etc.?

The biggest factor influencing the changes in the rhino species is the human impact, both positive and negative.

Poaching and habitat loss are causing losses of the species at a disturbing rate. With smaller habitat areas, rhinos are unable to move when seasons change and their bodies are under constant stress. This lack of large habitats and added stress is causing an increase of previously rare diseases which have been fatal to rhino. Fortunately with rhinos now being closely monitored and researched, treatments for the “new” rare diseases are able to be given effectively and thus saving the lives of rhino.

Orphaned or injured rhinos that have undergone trauma and many resultant treatments have a weakened immune system. This also influences their chances of survival or contribution to the next generation. Securing land and protecting these zones with Anti-Poaching Units are imperative for the future of the rhino species.

What do you believe will be the biggest hurdle these species will have to overcome in order to continue to survive in the wild in the future?

Poaching is the biggest hurdle currently facing the rhino species. Rhinos need the intervention of good people, including caretakers, veterinarians, helicopter pilots, medical support, funding and financial support and many more. Anti-Poaching efforts and the evolution of technology to prevent and detect poachers before the rhinos become targets is essential. This involves the use of technologies to track and monitor existing protected rhinos. Through education and word of mouth, and simply  willingness to help save the rhinos and save the survivors of poaching we will help the rhino thrive. Every dollar, every donation can and does help the rhinos overcome this massive hurdle that they are facing. 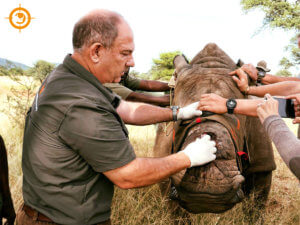 What is your favourite personal experience in which you have seen one of the animals use their adaptive traits to their advantage?

Their wound healing ability and willingness to survive and overcome their injuries and trauma are unprecedented. 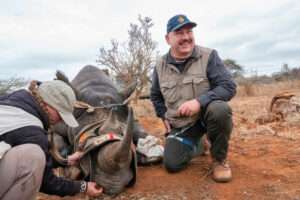 Want to support Saving The Survivors work and protect the Rhino?

You can donate on our website now! Please consider becoming a monthly donor to show your continued support in fighting for the future of Rhinos! 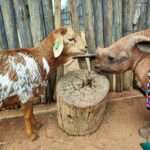 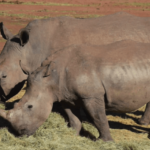