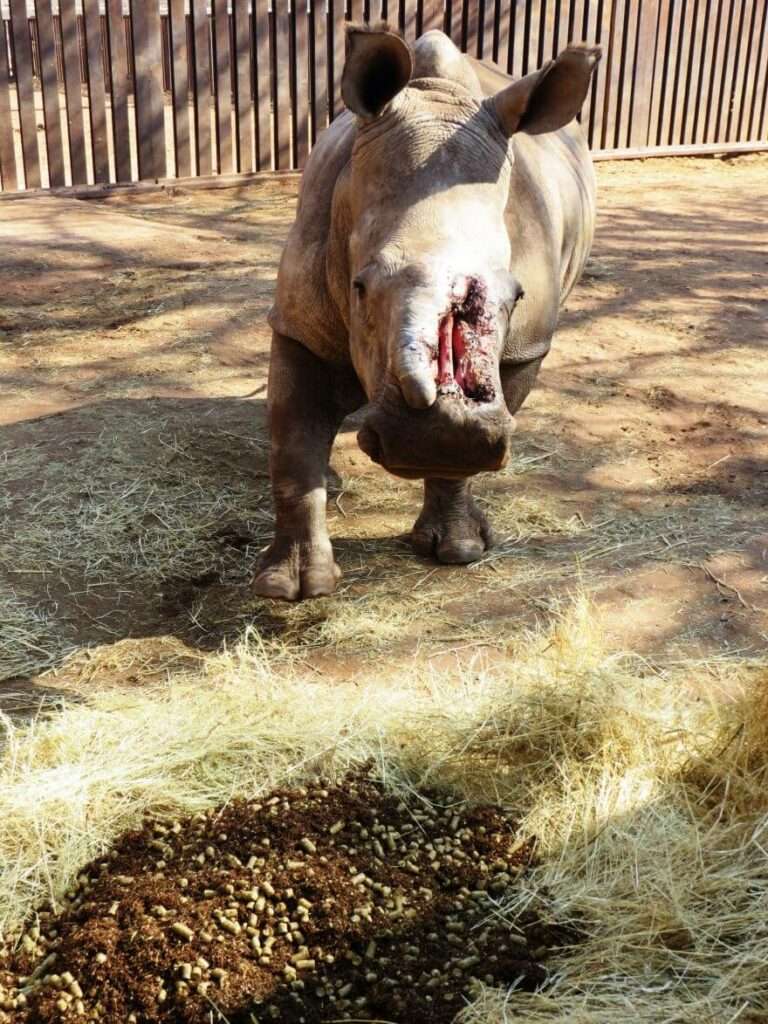 It is still hard to believe that our beloved Hope is no longer with us, especially since she left so suddenly and unexpectedly. But her spirit continues to live on, she remains the voice for other Rhino poaching survivors and she will forever Help Other People Evolve.

This is her story…

The approximately six year old Rhino was first darted and then attacked by poachers who hacked off both her horns and left her for dead. Badly mutilated, she wondered around and hid in the bushes for four days and five nights.

When eventually found, part of the rhino cow’s face, nasal passages and sinus cavities were exposed while several bones were also severely fractured. It was one of the most brutal poaching attacks since the rhino poaching scourge began. However, a decision was made by veterinary experts that the Rhino, who had since been named Hope, could be saved and she was moved to the rehabilitation centre at the Shamwari Game Reserve near Port Elizabeth.

Hope’s first surgery took place and Saving The Survivors (STS) was called in to assist with the treatment on her face. Dr Johan Marais, CEO of STS, described the 50cm by 30 cm wound as “one of the worst injuries” that he had ever worked on. The wound was cleaned, maggots removed and an artificial cast was put in place for protection. This process continued during the next couple of weeks/months.

A third procedure, taking over two hours, is performed on Hope. During the second procedure, the first shield was removed as it had come loose because she rubbed it off against the boma’s fence. During the third operation, the bottom part of the shield had to be drilled on because of insufficient bone structure to keep it in place properly. Radiographs had showed that the poachers removed too much bone for the required attachment points. More dead tissue and bone was further removed. A mould was also made of the shield to cut down on future procedure time. It was anticipated that Hope’s recovery would take at least a year and a half.

Hope received her fourth treatment, again over two hours. She was given injections of antibiotics, pain relief and anti inflammatories as well as an anti-parasite treatment. More maggots were removed and the wound was flushed. A clean new cast was then screwed on.

A fifth procedure is performed on Hope. Although the large wound had healed really well during the previous couple of weeks, a new type of protective shield had to be put in place once again as the previous one had come off. This new shield was more elastic but it was a challenge (taking almost three hours) to put it in place because of almost no bone left to attach it to. The challenge remained to keep her shield in place so that she was not vulnerable to infection and disease.

Some time had passed since the last procedure. Hope’s wound was being reassessed with a new protective shield out of elephant hide, thought to be strong but still supple enough, to be applied. The feisty rhino once again removed the previous protection of her wound. The Saving the Survivors team used stainless steel orthopaedic wire to stitch the elephant hide (obtained from an animal that died from natural causes) in place. This after kudu skin (wire tore through it) and hippo skin (too thick) were tried unsuccessfully. After the procedure, Hope was moved to a new enclosure at Shamwari.

It is decided to move Hope to a wildlife holding facility just outside Bela Bela in the Limpopo Province. Here she will be nearer to the STS team and the specialist treatment needed for recovery. The challenge remained to close the gaping wound that is not healing on its own. This remained a risk for infection due to maggot infestations among other things.

Survivor Hope has had at least 16 surgical procedures since she was attacked by poachers just over a year ago. And she had remained as big a fighter as ever. It was estimated that the wound had reduced by as much as two thirds. This is thanks to innovative procedures carried out in the past 12 months. The latest one was the Abdominal Re-approximation Anchor System (ABRA), which are specially made elastic bands from a Canadian company, Southmedic. The bands, stretched across Hope’s gaping facial wound, are designed for human patients who had received abdominal surgery and acted like shoelaces, stretching skin on both sides closer together.

Hope’s wound had closed even more since the ABRA strips were applied a month ago. But yet again she remained annoyed by the dressings on her face and kept rubbing them off against the boma’s fence. The STS team however didn’t give up and applied a glue-on version of ABRA as it was thought to be less irritating. A plan was also put in place to move Hope to a bigger enclosure with orphaned Rhino calves and more natural surroundings.

Hope remained in excellent condition, eating and drinking well, and her wound continued to heal. It even seemed that a small little back horn had started to grow, although this may have to be removed at some point. She did however seemed to be agitated at times when humans came too close to the boma fence. The treatment on her wound continued and various methods looked at and investigated to secure a permanent covering.

The day that all hoped would never come… Saving The Survivors shared the devastating news that our beloved white rhino cow, Hope, passed away. She was found in the late afternoon without life in her boma.

Dr Marais from STS was himself present at the post mortem. The entire small intestine was severely affected, showing signs of haemorrhage and discolouration. Looking at the injury, the course of the disease was extremely quickly. So much so that she must have died within an hour or two maximum. This is also confirmed by the fact that she was seen on Sunday afternoon with no signs of being sick, and then was found dead late afternoon.

Said Dr Marais at the time:

“Hope has won over hearts of people all over the world. She was a feisty and fabulous rhino that never gave up her fighting spirit. She contributed immensely to science, by teaching veterinarians how to heal her face. Other Rhinos may benefit from this new info. This is already happening with a Rhino called Seha, which is treated by Saving the Survivors. Seha is suffering from exactly the same injury as Hope. His wound healing is already much improved, due to knowledge that was gained from treating Hope.

“Hope was featured in hundreds of print publications as well as on all the major news channels and networks worldwide. By doing so she created massive awareness on the Rhino poaching crisis, across the globe. This is something that cannot be bought or measured in monetary terms.

I am incredibly privileged to have been able to work on such an amazing animal.”