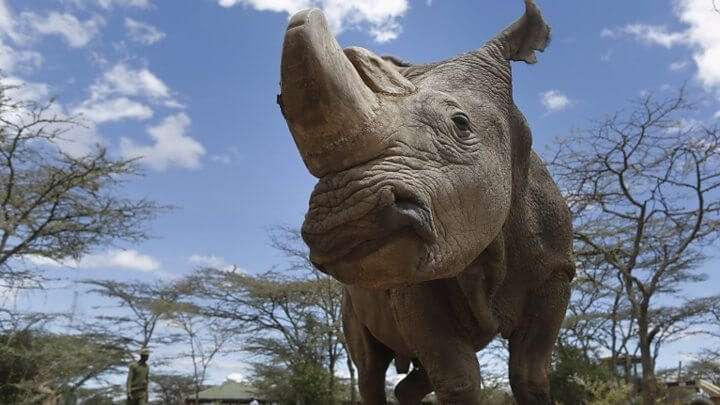 His death saw the conservation world and the wildlife community mourn. March 19th 2018 was a dark day for many. While Rhinos can live up to 60 in captivity, their life expectancy in the wild is in their 40s – Sudan had lived to a relatively good age.

So why was Sudan’s death such a global tragedy?

The reason why is because the death of Sudan declared his species, the Northern White Rhino, functionally extinct.

Sudan was the last male northern white Rhino and is survived by only two females, both past breeding age and unable to keep the species alive. In 2020, we now live with the fact that, despite many warnings, mankind has contributed to the fact that we have seen another species of animal die out on our watch and by our hands.

How many Northern White Rhino are left?

Sudan was born in the wild in 1973 and taken into captivity at the age of two. While living in a zoo, Sudan fathered two daughters, Najin and Fatu. In 2009, Sudan and his family returned to Africa and was cared for at  Ol Pejeta Conservancy until his death in 2018.

Under 24-hour guard, he was able to roam a 700-acre enclosure and enjoy his freedom amongst other Rhinos. Speaking to The Guardian after Sudan’s death, Zacharia Mutai, The head keeper at Ol Pejeta Conservancy in Kenya, remembered his gentle nature;

“Rhinos have a good sense of hearing and smell, and they would come towards us when we called. Caress his ears, and Sudan relaxed. If he needed medical attention, we didn’t have to sedate him; we could just stroke the tips of his ears.”

While the world mourned his passing in March 2018, and what it meant, many still have hope for the Northern White Rhino. Prior to his death, semen was collected from Sudan (and other males) and scientists plan to harvest eggs from the two remaining females. However, this would be a world first – IVF to save Rhinos has never been done before. While we can keep an optimistic mind, as it stands, the Northern White Rhino is now functionally extinct.