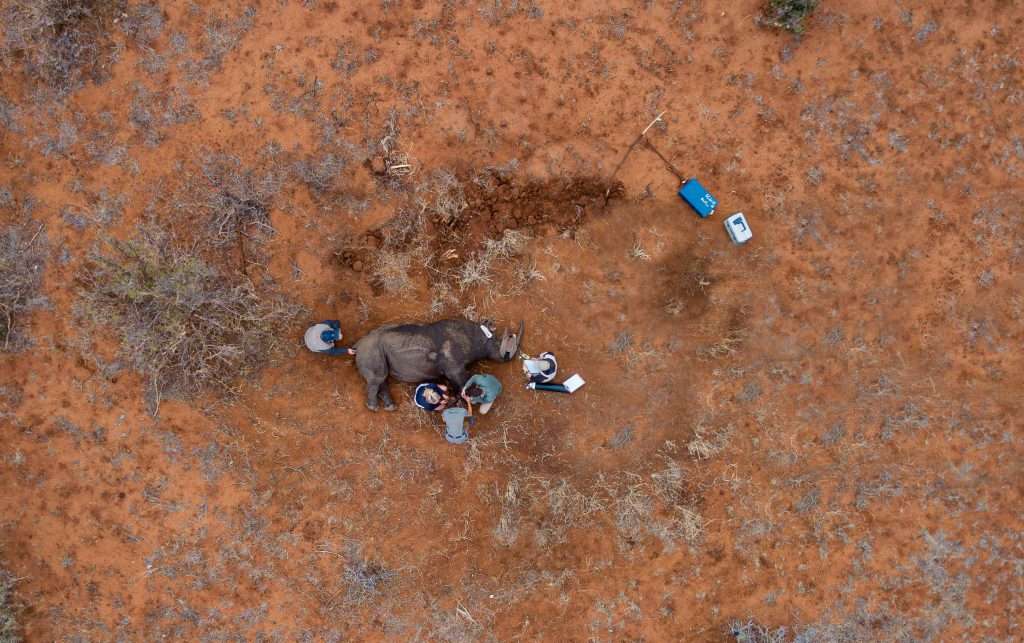 The Race To Rescue Rhinos In Massingir

STS veterinary unit in Mozambique was recently contacted to lead the rescue operation of 3 White Rhinos. They had escaped from Kruger National Park, to a community area in Southern Mozambique.

Unfortunately, the Rhinos had entered one of the most dangerous places in the world for their species. The village of Massingir, south of Limpopo National Park (LNP). This area is known to be a base for poachers. Therefore, urgent measures were quickly taken to prevent what would be a certain death situation.

The STS vet was flown to the remote location. There he met with LNP rangers, Karingani Game Reserve (KGR) rangers and also Mozambican police. Rangers were already tracking the different animals and had “eyes on” one adult female. We decided to take care of her first. The tracking teams continued to search for the other 2 Rhinos.

Meanwhile the Police informed us that other groups were also tracking the Rhinos. This group had other intentions…they were organised poaching syndicates.

A Race Against Time

The Rhino was chased close to the Karingani game reserve fence. It was darted from the air. A soon as the drugs took effect, the KGR fence team took down a portion of the fence. Team STS partially reversed the anaesthetic. Together with the helicopter pilot, police and rangers, they walked the precious Rhino back to safety.

Light was fading and the chopper got airborne again. Despite the huge joint effort, by night the 2 Rhinos were still to be found. At first light the next day, we continued tracking on foot. Under the burning summer heat, persistence paid off. At 2 pm another Rhino was located. It was herded through a gap in the GLC fence to safety.

At this stage, the third Rhinos’ location is still unclear. However, we fear that due to the dangerous location, its chances of survival seemed slim. We will keep looking and hope to find him before the worst happens.

We Need Your Help

Saving The Survivors needs your support to keep doing this critical work in Mozambique. This was a hugely costly mission to rescue these endangered Rhinos. Please donate now.