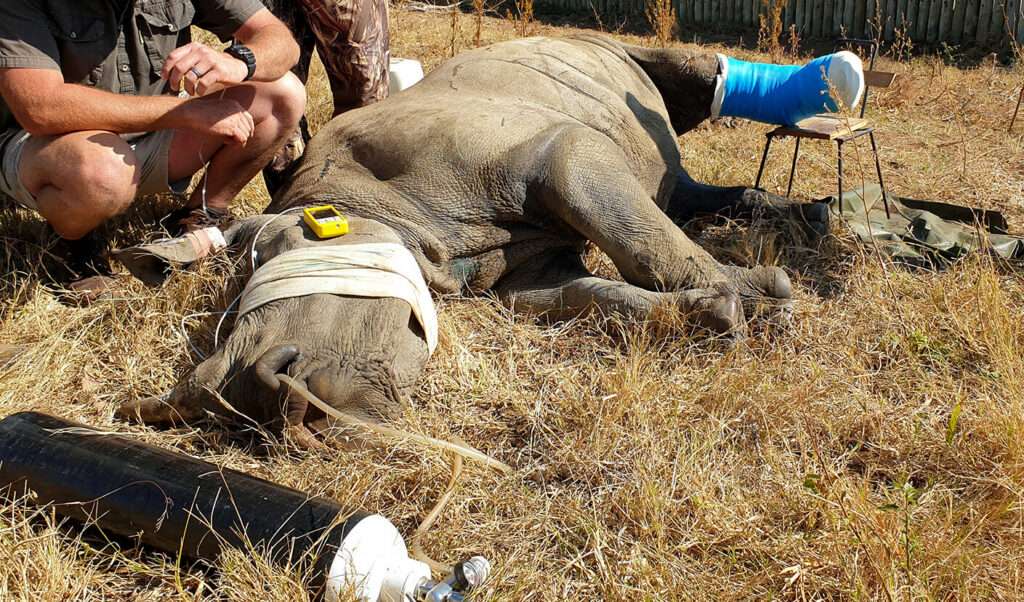 An injured White Rhino Heifer is reported on a private game reserve. A Heifer is a young female who has had any offspring. She was unable to bear weight on her left hindlimb, most probably injured by the adult bull on the property.

The attending veterinarian called in STS Founder Dr. Johan to assist. At the reserve x-rays were taken of the affected limb. The results conclude a small fracture and a rupture to one of the main tendons of the hindlimb. Unfortunately the skin was also found to be broken, making the fracture an open fracture. This increases the probability of infection and a worse prognosis.

However, the team decided to still take a chance and treat her by cleaning the wound, casting the limb so she could take weight, and giving her strong antibiotics for 2 weeks. After 2 weeks we will take off the cast and re-evaluate the wound, tendon and fracture, to see how she has responded to treatment. We will update you with any development of the poor White Rhino heifer.

We would like to thank all our supporters and as ever Ford South Africa and Craghoppers for their continuing support.

Please donate if you can to ensure that we are always there to answer that call and doing all we can to protect the remaining Rhinos. You can support our work by becoming a monthly or one off donor. Please help us to do more great work like this, and save the Rhino from extinction. Donate here.

Thank you from all of team Saving The Survivors for your support!